Mario Dumont's election troubles could be over forever 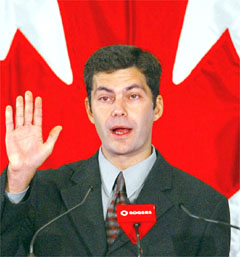 Over at the Globe, Lawerence Martin has assembled a list of prospective (unelected) candidates Harper might choose for Canada’s vaunted chamber of anti-democracy. The only Quebecer who makes the grade is Mario Dumont: “Mr. Harper needs allies from Quebec, and Mr. Dumont knows the terrain. The PM might even elevate him to a cabinet perch.”

I’m a little baffled by the ROC’s insistence that Dumont somehow knows Quebec better than, say, Mulroney’s folks. The Tories should, in theory, have a fairly healthy institutional understanding of Quebec. That they’ve tossed it away by focusing on ADQ voters shows just how disconnected the Conservatives have become from the province. Dumont’s troops, you’ll remember, ran the Tory campaign during the last federal election and delivered… one less seat than the Tories had going in.

But I’m getting away from my main point here, which is simply that it’s amusing to think Dumont, who’s party spent a grand total of a year-and-a-half with official party status in Quebec, might somehow have earned a spot in the Red Chamber simply by virtue of being (a) from Quebec, (b) soon-to-be unemployed, and (c) not a separatist (anymore). You’d think that criteria would qualify more than one Quebecer to make Martin’s list.