Maudit Racistes, in both official languages 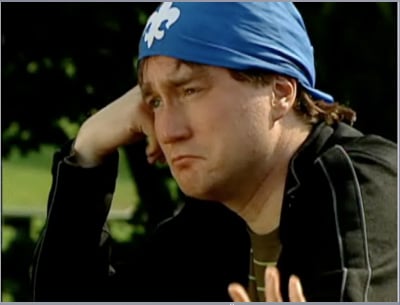 The other day, Journal de Montréal columnist and grande gueule par excellence Richard Martineau devoted part of his column entitled ‘Maudit Racistes’ to a This Hour Has 22 Minutes sketch entitled ‘Quebec Nation’. (This being the CBC, the archived episodes don’t have individual web addresses. Go to www.cbc.ca/22minutes and click on the October 7, 2007 episode.) Martineau –– who has the ability to be at once hilarious, biting, infuriating and wickedly cynical –– takes issue with the skit, which imagines a separate Quebec with “no roads, no towns, not even a radio. The only things we take is our racism.”

“Hilarious, isn’t it?” Martineau fumed. “Remember that This Hour Has 22 Minutes is broadcast by the CBC, the Canada’s public broadcaster that you fund with your taxes.”

True enough. The skit is a crude thing, laughable largely because it proves English people, especially actors, should never try to imitate French people speaking English. That sort of thing should be left to the professionals.

Martineau’s point, a familiar one around these parts, is that English Canada views Quebec as an expensive pain in the arse. Worse still, the ensuing disdain English Canadians have towards their French brethren is subsidized by our taxes. Worser still, that disdain is a one-way street: Quebecers rarely make fun of English Canada, and certainly not on the federal government’s dime.

Uhh, not so much.

Pierre Falardeau has made many movies — some excellent, some wretched, all of which rail against the evil that is Canada — with handsome subsidies from Telefilm Canada. Along with comedian François Morency, Falardeau has appeared at the Just For Laughs festival, which took in roughly $2 million in government subsidies in 2007. The pair presented a skit replete with anti-English sentiment, including one in which they “plant” an Englishman (‘planter’ in French also means to beat the hell out of someone) to the tune of Scotland the brave. (the skit starts at about 5:10.)

There’s an argument to be made that by making fun of each other’s stereotypes stereotypes, we learn to appreciate one another better. It’s even better when the government will pay for it, in both official languages.