Meanwhile, back at the castle ...

Liveblogging Ignatieff's speech on "Canada's place in a changing world" 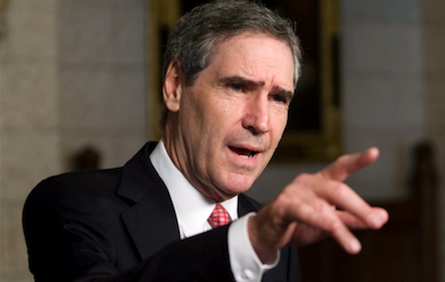 … okay, fine, it’s a chateau — the Chateau Laurier, to be precise — but ITQ is enjoying the fairy tale motif that has woven itself through today’s events. Jack and his beanstalk, Ignatieff’s castle-storming — all we need now is a dragon.

Anyway, Michael Ignatieff is back from Narnia just in time to kick off the fall session with a speech to the Canadian Club of Ottawa on “Canada’s place in a changing world.” Does that mean a super-extended-remix of last week’s smash hit English language ad ‘Worldview’? If so, will his musings on matters internationalist at least be accompanied by that jaunty-yet-pensive and vaguely Celtic-ish-sounding background score? I guess we’ll find out at 12:25 or so, so be sure to check back for full ITQ coverage.

12:16:46 PM
Oh my gosh, you guys, so sorry for my very nearly belated appearance in this liveblog; one of those stomach-churning connectivity glitches hit the ITQberry right as she took her seat in the Chateau ballroom, and was only resolved after a desperate prayer to the patron saint of livebloggers and a judicious battery pull. Oh, instant journalism. You do keep life interesting, don’t you?

Anyway, as a result, I missed the introduction of the head table, although I recognize the red-tie-festooned gentleman to the immediate right of the host; he is, of course, the keynote speaker of today’s event. (I did manage to catch a reference to the Chinese Ambassador to Canada, who is *also* at the head table, as are a few other sadly unidentified types.

12:19:53 PM
After a gracious introduction, Ignatieff takes the lectern, and earns a standing – well, partially standing — ovation from the crowd. There are a *lot* of Liberals in attendance, by the way. Not that there’s anything wrong with that.

12:20:57 PM
I’m going to get straight to the speech with no colour — at least, unless and until he starts boring me — so, to start, he asks: Why does Michael Ignatieff run for office? He is, he says, his father’s son — his father, an immigrant to Canada, who served his adopted country as a public servant. He’s the son of that man, and that’s why he wants to be part of the team that will give back to Canada, and the world.

12:22:52 PM
And we’re off to the prepared text — Canada in a changing world. What happens, he wonders, when the “centre of gravity” shifts to Asia, and China and India – drink! – become the global powerhouses? Well, we shouldn’t be scared — not according to Ignatieff — as long as we have leadership to “seize” the opportunities.

12:25:26 PM
After the last four years of Stephen Harper’s government, he says, “it’s hard to remember how much Canada mattered” — which is what he’s going to remind us of right now through A Very Liberal Portrait of Canada. There are references to blue helmets and Pearson, and even Kananaskis in 2002.

Ooh, a pitch for the Red Tories — “Under both Liberals and Progressive Conservatives, Canada proudly led the world stage.” But the Conservatives — these Conservatives, that is — are “giving up Canada’s place in the world.” The prime minister changes foreign ministers like he changes his shirt — his words, not mine — and we’re no longer the world’s leading peacekeeper, or among the top donors — and the Conservatives “have abandoned Africa.” Stephen Harper has “so dimished” our influence that we’re in a fight for that seat on the Security Council that his father held – and that Canada used to hold every decade – while abandoning Canadians like Suuad Mohomed – but a Canadian is a Canadian is a Canadian.

Big applause there, by the way.

12:31:51 PM
It’s all very tragic, as he sees it — Canada still has the best diplomats, the best soldiers, but “nothing seems to matter to this government”.

A major pitch for celebrating “all our Canadians” — including those who have lived overseas. Huh. An attempt to turn “Just Visiting” into a pro, not a con.

12:33:58 PM
Ahh, ideas! First up, Canada should pledge to host a permanent G20 secretariat – in Canada! But probably not in Tony Clement’s riding, I’m guessing.

Also, we must “renew our relationship” with our American continent-mates — and our role in Afghanistan after 2011 will be different — diplomatic, humanitarian, constructive. “We need to be fully part of the effort to restore stability in this part of the world,” he says. Canadian troops have done their part — now it’s time to commit our “full diplomatic muscle to the same ends” — all the while protecting and respecting the rights of Canadians abroad.

12:36:25 PM
Arctic sovereignty shoutout – honestly, his policy sounds indistinguishable from the current government, right down to the military investment but with rhetorical pittance paid to investing in Northern people, and we’ll also become a “Pacific power”, working with China and India.

12:37:31 PM
Oh, and a Liberal government will bring back Team Canada! The economic missions, that is — which were such a success under Martin and Chretien, and *that* line got the biggest reaction from the crowd so far

12:38:31 PM
He touches on “Responsibility to Protect” — a concept “in which I had some small roe” — and the need to make an effort to *prevent* states from collapsing, not just act afterwards

Even lobstermen — and, presumably lobsterwomen — in PEI are “quicker and smarter” than this government, and it’s time Canadians embrace the country he remembers from his father’s era, and the country we can be again.

We — oh, you know what’s coming — can do better. Yes we can! Wait, no, scratch that last part.

12:40:52 PM
Lots of applause, although it’s so hard to tell whether this is a tough crowd, and Heidi Bonnell then takes the stage to thank Ignatieff for “choosing the Canadian Club” to give this speech as parliament returns. Oh, and they have a small gift! Aww, it really is small — and flat, and bookshaped, which means I can’t tell you what it is.

Meanwhil, the journalists have started to stream out into the hall — he’s not scrumming now, so there’s no reason to stick around — and ITQ is going to join them.

12:45:42 PM
Well, the verdict seems to be — good, with moments of great; surprisingly sharp lines on Harper, and all in all, a reasonably successful outing, as far as getting his key foreign policy issues out there. Of course, we’re spending most of our time discussing What Jack Will Do, since that’s the drama du jour, but still.

Anyway, I’m going to head back to the Hill and forage for lunch — or, depending on how rigidly you define the three meals of the day, breakfast — I’ll see you back here — on the blog, not this thread — later this afternoon.