Megapundit: Because of the unfreezing process, Christie Blatchford has no inner monologue

Junk science, junk politics
Behold: six columns about five things that are more or less to do with federal politics.

The Canadian vision of a carbon tax is all about incrementalism, The Globe and Mail‘s Jeffrey Simpson argues. “Higher prices would change behaviour away from carbon-intensive products and lifestyles … [and] people and businesses would have time to adjust” as the tax was “phased in gradually.” But in the past year, gas prices have soared far higher and far quicker than anyone—carbon tax proponents included—anticipated, which imposes all the burdens of a carbon tax with none of the touchy-feely revenue neutrality and tax breaks to farmers and low-income families. As such, Simpson concludes, “the political timing” for Stéphane Dion’s gambit “could not be worse.”

For Dion’s sake, the National Post‘s John Ivison hopes the plan—which will be revealed tomorrow, first to the Liberal caucus and then to the press gallery—is “less patronizing than the ’50 tips on greener living’ that appeared on the Liberal Web site yesterday.” It’ll need attractive packaging, after all, what with its rumoured $200 boost to the cost of heating oil for a single home, its “hogwash” suggestion that prices won’t rise at the pump and, fundamentally, the unnerving fact that a new tax—however purportedly neutral—now forms “the centerpiece of [the Liberals’] election campaign.” Dion “may feel a debt to the planet,” Ivison concludes, “but even his own caucus doubts Canadians are prepared to pay it off with their money.”

Is it Financial Post Comment Junk Science Week 2008 already? Crikey, the year just flew by. Anyhoo, in this year’s first installment, Terence Corcoran goes after anti-pesticide campaigners, and the scandal-happy media, for utterly ignoring Health Canada’s findings that the pesticide 2,4-D is safe when used as directed. (The Ottawa Citizen‘s Dan Gardner already did that, as Corcoran notes, calling the limited reaction to his piece “instructive.”) Corcoran also excoriates the Ontario College of Family Physicians’ Neil Arya for “warping Health Canada’s thorough review of the issue.” (Huh. Gardner already did that too.) And Corcoran promises to explain, in a future article, why the “precautionary principle” cited by so many in the anti-pesticide camp simply doesn’t hold water. (Er… Gardner already did that too. How peculiar!)

It’s awfully easy for Peter MacKay to insist that Canadian soldiers in Afghanistan “report any allegation of unlawful activity they see,” says the Calgary Herald‘s Don Martin. It’s not so easy for soldiers “rumbl[ing] through swaths of opium-producing poppies so vast, a single field would net Canadian law enforcement their average annual seizure”—or, for that matter, for soldiers grappling with the ethical implications of the “man-boy homosexuality [that] has flourished in the aftermath of Taliban zero-tolerance laws.” Many compromises of principle are necessary when engaging a country like Afghanistan, Martin argues, and there are many wrongs Canadian troops have no capacity to right. But that doesn’t mean allegations of child rape by Afghan police officers shouldn’t be reported. Ideally, he says, “Afghan officers being trained in law enforcement can be pressured to practice it themselves.”

The Star‘s James Travers yet again rehashes his version of the NAFTA memo debacle, in which high-ranking Tories “put ideology ahead of national interest by recklessly interfering in the U.S presidential campaign.” And for the first time since… uh, his last column, he argues that John McCains’ upcoming visit to Canada will reenergize the scandal.

The Vancouver Sun‘s Barbara Yaffe talks to Senator Bert Brown about his quest to convince the provinces to begin electing Senators—as he was in Alberta. “It would take five years to achieve a majority of elected senators,” Yaffe notes. “Once that happens, the public, says Brown, would soon demand that provinces have equal representation.” But with Ontario noncommittal and Quebec firmly opposed to the idea, Yaffe says “the news on this front is not terribly good.”

Duly noted
The Globe‘s Christie Blatchford provides a thorough—and thoroughly icky—biography of Mubin Shaikh, the Sharia proponent-cum-cocaine user-cum-army cadet-cum-aspiring jihadi-cum-RCMP informant who’s now the lynchpin in the so-called “Toronto 18” terrorism trials and Blatchford’s… ugh, please don’t make us say it… “first Muslim crush.” “He’s a devout Muslim in the midst of a largely godless country, with one foot in Islam and the other in the Timmy’s, a man who prays five times a day and names his son Mujahideen, but who does doughnuts outside the Canadian Tire ‘because I can’t resist a freshly snow-covered parking lot,'” she writes, mistily. But “he’s still my imaginary Muslim boyfriend.” Regular readers will know we hold Ms. Blatchford in high esteem, but blech!

On the occasion of Jean Charest criticizing Mario Dumont’s proposals to stem the growth of the Quebec’s provincial debt, the Montreal Gazette‘s Don MacPherson notes that it was just two years ago that Charest “made debt reduction a major theme of the latter part of his government’s first term in office.” Luckily, he notes, the Premier has since decided there’s no need “to reduce the size of the debt in absolute terms” as long as it shrinks in proportion to the GDP. “Quebec still rank[s] second-last among the provinces” by that measure, MacPherson writes, but Charest can at least legitimately claim to be making progress.

Andrew Cohen‘s Tour of Europe for the Citizen brings him to Lodz, in Poland, where he assesses the country’s post-industrial efforts to achieve normalcy—which, having been “kept down so long,” is all it really wants. “Poland is a quite mediocre country in some regards,” Prime Minister Donald Tusk tells Cohen (though certainly not when it comes to outrageous statements about soccer referees!). “The only natural resource that we have, and with which we can compete, is freedom.”

Barack Obama’s focus on the responsibilities of African-American fathers “is the racial equivalent of Nixon going to China,” says the Globe‘s John Ibbitson, and “it is uncertain what political advantage Mr. Obama hopes to gain from raising this subject.” But given Obama’s own tumultuous (if not necessarily unhappy) childhood family situation, Ibbitson says it’s clearly “deeply personal.”

And finally, the Globe‘s Margaret Wente phones in a few hundred words of piffle about Google. It’s robbing us of our once-indomitable attention spans, she maintains, but at least, during a recent trip to Chicago, it informed her and her sister what the leashed monkey (see below, right) in Seurat’s Un dimanche après-midi à l’Île de la Grande Jatte represents. “The monkey is a satirical comment on bourgeois profligacy,” she gushes. “Without Google, we never would have known!” 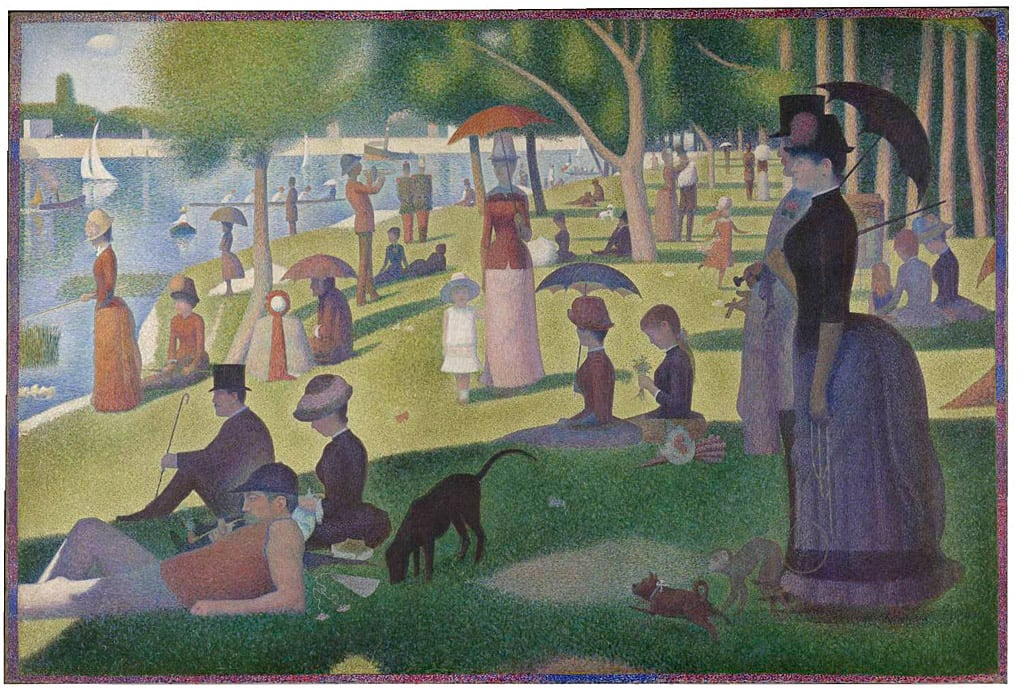