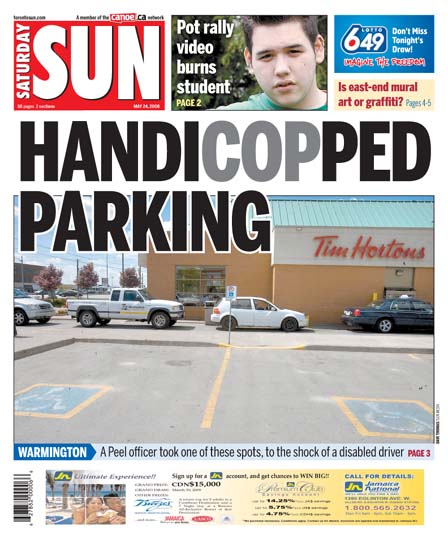 In a Saturday cover story, the Toronto Sun‘s indefatigable Joe Warmington told the tale of Gerard Taylor, from Sault Ste. Marie, who had shocking photographic evidence of a Peel Regional Police cruiser parked in a handicapped spot at a Wendy’s/Tim Horton’s location in Mississauga. Taylor understandably wanted that spot for himself, having lost both legs nearly 30 years ago attempting to jump a freight train to Sudbury to see a rock concert—a back story that’s all the more worthy of a Stompin’ Tom number when you realize how perfectly “Sault Ste. Marie” rhymes with “double-amputee.” But we digress.

Just about everyone would agree that cops shouldn’t park in handicapped spaces except in emergencies, and both Taylor and Warmington seemed to think they had these coppers dead to rights. “He was only parked there for 90 seconds because I think someone told him about us snickering and talking about taking a picture, so he left without even a coffee in hand,” said Taylor. “Still, that is 90 seconds of a handicapped person’s life that is already hard enough. It’s the principle.”

“It should be interesting to see if they do manage to come up with a reason,” Warmington chimed in. “A disabled cop? Did the car run out of gas? Was there an emergency under way? Just a bad mistake? Or was this a lazy cop, who figures the rules are just for those not in uniform?”

Today, courtesy of Warmington, we got our answer. It was option #3: an emergency under way—specifically at Wendy’s, where an employee had accidentally tripped the silent alarm.

“The police said officers park their vehicles wherever they deem necessary to protect the public safety,” Warmington reports. “Responding to a ‘panic’ alarm, they believe, is a ‘good reason.'”

Taylor, however, is having none of it. “This is the first I have ever heard that police can park in a disabled spot during an emergency.”