Megapundit: From the depths of Barack Obama's cosmopolitan soul

Lorne Gunter, writing in the Edmonton Journal, says Stephen Harper has nothing to lose in the Sept. 8 by-elections and Stéphane Dion has everything, first and foremost his job. “Should the NDP win Westmount, as it did the previously safe Liberal seat of Outremont last fall, Dion will have trouble keeping his job,” he opines, but he goes way out on a limb and says he “suspect[s]” Westmount will stay red. He also suggests the Tories play off the “timidity” of Ontario voters in Guelph by paining the Green Shift as a “radical threat to the status quo.”

“By-elections are often overanalyzed, overblown, overrated. In the grand scheme, they shouldn’t toll heavily,” says The Globe and Mail’s Lawrence Martin. “But they do.” The Canadian Alliance’s “humiliation” in Perth-Middlesex in 2003 convinced Harper to pursue a merger with the Progressive Conservatives; Deb Grey’s victory in Beaver River in 1989 constituted Reform’s “breakthrough”; and last year’s NDP win in Outremont buried Stéphane Dion in an “avalanche of derision.” This is all true. But those outcomes strike us less as evidence that by-elections matter than evidence of just how overanalyzed, overblown and overrated they really are.

“Historical parallels” between Lester Pearson’s first minority government and Stephen Harper’s are “obvious,” L. Ian MacDonald writes in the Montreal Gazette. Those parallels are… well, the fact that Harper’s is a minority government, the fact that he desires a majority, and (likely) the fact that he won’t get it. (One difference: Harper’s selfless belief in fixed election dates, which, MacDonald says for the umpteenth time, take much valuable leverage away from the Prime Minister.) This goes on, tediously, for a few hundred words, and then we learn that there’s probably going to be an election soon, “since the Liberals realize they can’t hide behind the curtains forever.”

A “fresh perspective” is always welcome, but “how politicians tug power’s levers” and circumvent ethical obstacles is no different under the Tories than it was under the Liberals, says the Toronto Star‘s James Travers—and that, if it need be said, is a bad thing. Or, in Traversian: “The trend line from Pierre Trudeau to Stephen Harper has been steady: Influence over the amorphous, frustratingly horizontal federal machinery concentrates power in the Prime Minister’s Office where issues that matter are managed with command-and-control authority.”

The Globe‘s Jeffrey Simpson offers Canadian politicians plaudits for the following good deeds: Ed Stelmach’s decision to fund research into carbon capture and storage; Dalton McGuinty’s decision to protect the boreal forest (because “untouched forests are wonderful carbon sinks”) and to sign on to the Western Climate Initiative; Stephen Harper for agreeing to pour money into Ontario infrastructure; and the premiers for finally agreeing “that within one sovereign country, there ought to be as few obstacles to the movement of people and capital as possible.” (Interestingly, Simpson can sound just as condescending while favouring politicians with praise as when slagging them!)

Hubris? The man is a god!
Barack Obama is not the President of the United States and he has no foreign policy record other than being “perfectly, publicly wrong” about the troop surge in Iraq, Rex Murphy argues in the Globe. A trip to Berlin for a man in such a situation should have involved “making calls on the Chancellor, meeting with opposition politicians, doing—as the Windsors call it—a bit of a walkabout.” Instead he mounted the podium like a colossus, Murphy complains, “acting in every way as if he were already president delivering, Urbi et Orbi, a proclamation.” This is both awesomely hubristic and “very reckless,” Murphy argues, for a man trying to win over millions of undecided voters.

No one will be surprised to learn that the Star‘s Haroon Siddiqui saw Obama’s Berlin rally somewhat differently. He chooses to focus on the moment when Obama spoke of his Kenyan goatherd father and was interrupted by “ululating” women in the distance, “obviously of African or Arab origin.” Gravol and barf bags at the ready, Canada? Here we go: “Obama beamed. … Here was an African American running for president being hailed by anonymous Arab-African women, in their own tradition, in the most unlikely of locales, and he … reciprocated instinctively from the depth of his cosmopolitan soul.”

The Ottawa Citizen‘s Dan Gardner says the rapturous applause Obama received in Berlin for what was a clunker of a speech, and the various messianic qualities ascribed to him in some quarters, prove how intense the hopes that have been “projected” onto him are. And we’ve already seen the downside to that phenomenon, he argues, when Obama adopted a few centrist positions and “the sound of slamming bedroom doors and liberals weeping into their pillows could be heard across America.” Gardner is impressed with Obama as a potentially “good chief executive,” he concludes—an office he’d be more likely to win “if people stop dreaming that [he] will change the weather and cure lepers.”

Military politics
The Edmonton Journal‘s Graham Thomson recaps Foreign Affairs Minister David Emerson’s whirlwind tour of Afghanistan, noting his comments on the security situation, corruption and other issues mirrored the trip itself: “low-key, cautious and short,” not to mention, in contrast with his predecessor, “gaffe-free.” (We’re not calling it a gaffe, but we can’t help but think that had Maxime Bernier expressed hope “that Afghanistan becomes—or continues to be—a viable state,” as Emerson did, he might be taking some flack for it.)

Never mind the media, Scott Taylor counsels Walter Natynczyk in the Halifax Chronicle-Herald. By ignoring the chief of defence staff’s “appraisal of the insurgency as a complex and challenging entity” and seizing on his “rosy assessment” of the mission’s progress, the Ottawa press gallery almost seemed to still be “mourning the departure of the last chief of defence staff and venting that emotion on poor old Natynczyk,” Taylor suggests. He has a big enough challenge in keeping his promise not to extend troop deployments, Taylor concludes, without worrying about Canadian editorialists’ opinions.

The end of dreams, and of reason
George Jonas, writing in the Post, muses over how the world will go to hell next. Will it devolve into a “clash between U.S.-EU-style democracies and Sino-Russian-style autocracies,” as Robert Kagan suggests in his book, The Return of History and the End of Dreams? Will “tribalism” or “militant, theocratic Islam” defeat liberal democracy? Or will “liberalism itself” be our undoing, with its “smoke-, smut-, seat-belt-, language- and calorie-police”? Jonas won’t rule any of these dystopias out, but he believes the third is most likely—”democracy allying itself with a kind of pseudo-scientific health-worshipping eco-maniacal post-family feminism, culminating in a whopping tyranny to make autocracy, or even oriental despotism, look like a Boy Scout jamboree.” (Betcha five bucks it doesn’t happen!)

Also in the Post, Robert Fulford takes issue with one of Kagan’s first principles—namely, that people really believed in the early 1990s that western democracy would spread like wildfire once the Soviet Union collapsed. The Berlin Wall come down in 1989, he notes, but that year also “brought the cold-blooded killing of perhaps 1,000 Chinese in Tiananmen Square. … Surely, no one could have digested that year’s events and concluded that democracy was everywhere on the march.”

In comparing dictatorial Sudanese President Omar Hassan al-Bashir to Omar Khadr, because both were arguably once child soldiers, the Toronto Sun‘s Peter Worthington attains stratospheric levels of incoherence. Excelsior! (Remove all references to Khadr from the column and it improves immeasurably, by the way, which just proves how bloody odd it was for him to bring it up.)

Hot air
It was “widely reported” that the UK broadcasting regulator had deemed Channel 4’s The Great Global Warming Swindle “unfair, biased and totally misleading,” Lorne Gunter argues in the National Post, but in fact it ruled that the documentary did “not materially mislead” viewers. This discrepancy proves that “green authoritarians are as interested in silencing their opponents as they are in disseminating their own views,” he suggests, which is why they brought a government agency into it in the first place. 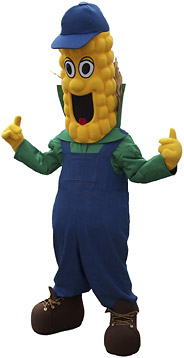 Also in the Post, Terence Corcoran wonders whether Corn Cob Bob—the friendly spokesmascot for the Canadian Renewable Fuels Association—will survive its ongoing battle with the C.D. Howe Institute, which recently released a report questioning the environmental and economic justifications for corn ethanol subsidies. The CRFA’s response is, in Corcoran’s judgment, “a generalized and impossible to follow critique of [C.D. Howe’s] life-cycle analysis methods.” Its most devastating counter-argument is that the C.D. Howe report fails to appreciate “that ethanol is less energy efficient than gasoline by volume,” Corcoran says, which isn’t exactly “a big marketing win” for Bob.

Duly noted
The Vancouver Sun‘s Daphne Bramham speaks with Doug Charko, the Canadian Olympic team’s official meteorologist, about the pollution issue (it all depends on the wind) and China’s promise to seed clouds and “avoid downpours” during important events (it’s “actual science,” says Charko, but only works “on a small scale). Charko is predicting much higher winds for the sailing events than other teams, we learn, which, if he’s right, could provide the Canadians with a “huge benefit.”

The Globe‘s Gary Mason reports from Whitehorse on the rapidly changing face of the Yukon and its capital city. On the bright side, massive population growth has led to an explosion in property prices, and many recent land-claim agreements between Ottawa and native bands portend a more prosperous future for the territory’s aboriginals. But there’s no consensus on whether the attendant loss in image—e.g., the idea that “the typical Yukon woman is … some Buckshot Annie who can blast a shot glass off a person’s head with her rifle”—will be good for tourism, or for Whitehorse’s soul.

The Globe‘s Margaret Wente explains how and why she joined the horsey set, and how she came to crack a rib and bruise her coccyx as a result. We prescribe bed rest, ibuprofen and never writing about drug policy again, and wish her a speedy convalescence.