Power to the people
On the end of cheap oil, the dawn of trans-Canadian hydroelectricity, the Green Shift, and that total hack, John Lennon.

In the Montreal Gazette, L. Ian MacDonald says inter-provincial electricity transmission is the “whole new game of Canadian federalism,” as Ontario—”we’re talking about 40 per cent of the Canadian economy here”—struggles to meet its electricity needs even while it still burns coal, and Quebec and Newfoundland ponder where best to direct their excess hydroelectric capacity. Except for Newfoundland’s bitterness over its disastrous arrangement to sell power to Hydro-Québec at 1969 prices, MacDonald says “selling to Ontario, through Quebec, [would make] the most sense.” And if anyone can soothe Danny Williams’ jangled nerves and bring him on board, he believes it’s Jean Charest. Included in the Premier’s limitless arsenal of talents, MacDonald opines, is that he’s “very good at relationships.”

Lorne Gunter renews his many objections to Stéphane Dion’s Green Shift in the National Post: federal revenues are only fat and happy during this “economic slouch” because of Albertan oil sales, thus it’s unfair “to make the West the bad guy”; Alberta and Saskatchewan families would suffer a disproportionate burden under the scheme, one that would dwarf the fiscal imbalance Dalton McGuinty’s constantly complaining about; and it’s not an environmental plan anyway, but, in the helpful words of Liberal MP Ken Boshcoff, “the most aggressive anti-poverty program in 40 years.”

Norman Spector, writing in The Globe and Mail, suggests Stephen Harper might be leery of adopting “a firm foreign policy on the issue of climate change” given Canadians’ wavering commitment to the Afghanistan mission, and their aversion to tough policy initiatives in general. Afghanistan is a “Liberal war,” it “satisfied all Jean Chrétien’s professed reasons for staying out of Iraq” and it fulfilled our stated desire “to play an active role on the international stage,” Spector argues, but for many Canadians, “foreign policy is about feeling good about themselves, not about Afghans … or any other people.” Chrétien understood that perfectly, Spector suggests, when he agreed to aggressive Kyoto targets with no intention of honouring them. And Harper may be catching on as well.

“Is it not presumptuous to suppose that we humans, with our SUVs, have the power, to influence nature and destroy the world?” Peter Worthington asks in the Toronto Sun. The answer is yes—because climate change science is not settled, because the UN excludes dissenting scientists from its reports, because Kyoto was just a wealth-transfer mechanism, and because carbon dioxide is “nature’s fertilizer.” We feel so much better! 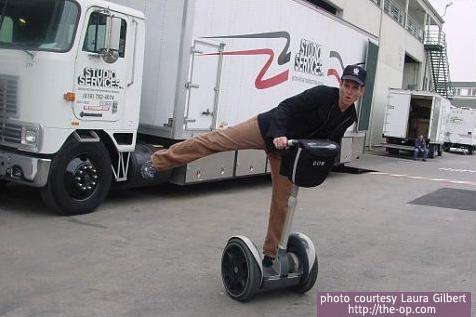 The Vancouver Sun‘s Barbara Yaffe looks at the efforts of a local group, the Vancouver Peak Oil Executive, to push the city ahead of the curve when it comes to managing perpetually rising oil prices and promoting the side benefits—less traffic, less urban sprawl, improved health from walking and cycling everywhere, and so on. We especially like Yaffe’s suggestion that “governments need to relax regulations so that … Segways are welcome everywhere.” It’ll be like a city of G.O.B. Bluths!

In the Globe, Rex Murphy unflatteringly compares John Lennon’s “Give Peace a Chance” to Irving Berlin’s “Puttin’ on the Ritz.” We know what you’re thinking: um, why? Well, because a piece of cardboard on which Lennon scrawled the lyrics just fetched $800,000 at auction even though they’re pure dreck, while “Puttin’ on the Ritz” is “clever and highly ingenious” and… uh, the lyrics probably wouldn’t fetch as much. That’s our best attempt, anyway. And while we agree “Give Peace a Chance” is rubbish, calling Lennon a “song-writing klutz”—even compared to Berlin—might be the silliest thing we’ve ever read from Murphy.

Here’s a typical piece of trash from Mr. Lennon, accompanied by some other untalented Scousers of no historical importance:

(In fairness to Mr. Murphy, the Brits do still ski exactly like that.)

Canadian justice
“Fifteen judges reviewed [Steven] Truscott’s case in three levels of court,” George Jonas writes in the Post, and the one who disagreed with his conviction “turned out to be right.” This is proof, Jonas argues, that one mustn’t be satisfied with “jury verdicts or appellate court opinions”—or any other “official” opinions—simply because they’re “the last word of duly constituted authorities.” To do so “means acquiescing in the … wrongful conviction of a Donald Marshall Jr., a Thomas Sophonow, a David Milgaard, a Guy Paul Morin,” and—wait for it—”in the wrongful conviction of Conrad Black.”

Count on the Globe‘s Margaret Wente to counterbalance the sometimes annoying harm-reduction fan club (as opposed to those who support it, as we do, as an experimental necessary evil) with her own brand of “harm reduction doesn’t work” hyperbole. What’s interesting is that none of her three sources—a cop and two doctors specializing in addiction—explicitly condemns harm reduction except as a substitute for, or in the absence of, treatment (which is a perfectly salient point). In fact, in a recent letter to the Globe, one of the doctors, Milan Khara, suggested “it may be that Insite should be available as part of a continuum of addiction services.”

The Star‘s Rosie DiManno finds all the usual plot points in the story of yet another Saturday night shooting in one of Toronto’s most violent neighbourhoods: “multiple gunshots heard, brazenly public, no witnesses coming forward”; resentment over disproportionate coverage afforded to white victims; and accusations of police insensitivity. “This city will lose a good chunk of its soul if the dead and wounded … are prioritized by race, affluence, school ties or even random circumstances,” DiManno opines. And she suggests the blanket coverage recently afforded a young man (and his two friends) who “drown[ed] in daddy’s overturned Audi after speeding along country roads in the Muskokas” exposes “that chasm—the variance in human value, compassion versus condemnation.” (We, on the other hand, are not quite sure what a car accident has to do with a shooting.)

Afghanistan’s future
In the Halifax Chronicle-Herald, Scott Taylor recounts his meeting with “the slightly built Ramazan Bashardost, a former cabinet minister in the Karzai government turned anti-corruption crusader, and if he has his way, the future president of Afghanistan.” Bashardost—who seems to be something of a contrarian—believes more than enough money is coming into Afghanistan to rebuild the country, but progress has been slow because most of it goes to foreign contractors and various NGOs who aren’t “actually providing aid to the people.” Asked by Taylor “how exactly he intends to eradicate the warlords, corrupt politicians and drug lords when he possesses no private army of his own,” Bashardost “shrugs” and says, “It will be the people’s will.”

The Globe‘s Christie Blatchford looks at the charitable efforts of Maureen Eykelenboom—mother of Cpl. Andrew Eykelenboom, a Canadian medic killed in Afghanistan in 2006—whose organization has so far donated $128,000 to the Assistance to Afghanistan fund. Blatchford’s impression has always been of a “resolutely composed” woman, “seeming if not quite cheerful, always sanguine.” But after a recent trip to Afghanistan to view the fruits of her and her son’s labour, Blatchford reports Eykelenboom finally became “alive to the enormity of her loss and the grief she had kept at bay with the work and travel.” After all, Blatchford notes, for her and other parents of fallen soldiers, the question of “is it worth it?” takes on a particular poignancy.

The Edmonton Journal‘s Graham Thomson speaks to a Dutch Air Force helicopter pilot about what it’s like to fly a retrofitted 34-year-old Chinook around Afghanistan, and gets rave reviews. “It’s honestly one of the best helicopters in the world,” the pilot gushes. This is all rather “galling,” Thomson suggests, since the Dutch Chinooks were ours until we sold them as part of a “cost-cutting effort in the early 1990s,” and we’re now reduced to begging, borrowing and renting replacements.

The Khadr equation
The Toronto Star‘s James Travers believes Canada’s decision to let Omar Khadr rot at Guantanamo can be understood as simple mathematics: “After considering the legal realities and political risks, consecutive federal governments calculated that the interests of more than 33 million Canadians are greater than the rights of one”—particularly when those governments were and are obsessed with convincing Washington that Canada isn’t a haven for terrorists. But for a country trying to maintain its place in world affairs—or reestablish it, if you listen to the Tories—Travers says “failing to take a stand,” and abandoning a 15-year-old citizen, has significant consequences. What those are, exactly, he doesn’t specify.

The government’s stance on Khadr is much like its insistence on “boycotting Hamas and Hezbollah” even as Israel softens its approach, the Star‘s Haroon Siddiqui believes, tipping hat to Alexa McDonough, who bemoans that “We have a Prime Minister who alone in the world still considers George Bush his political hero.”

Duly noted
Michael Byers takes time out of his effort to upset Hedy Fry in Vancouver Centre to tell the Globe‘s Lawrence Martin that he wants the NDP to change its name… to the Democratic Party. And not in spite of the obvious shout-out to Washington—of which the NDP rank and file isn’t particularly fond, in our experience—but because of it. “In many ways,” says Byers, “Barack Obama’s platform is close to Jack Layton’s platform.” Martin agrees: “When you’re a party out of the era of Guy Lombardo and Sputnik, the adjective ‘New’ doesn’t quite cut it.” He suggests a name change could “widen the party’s reach” and serve as an “attention-getter” in the absence of a “breakout issue.”

“Crudely photoshopping a picture of the launch was not the dumbest thing about” Iran’s missile tests last week, Dan Gardner argues in the Ottawa Citizen. That honour goes to Tehran’s sense of timing, which served to bolster Washington’s dubious claims of ballistic missile proliferation even as vocal critics question the necessity of anti-missile installations in Eastern Europe. Particularly given Moscow’s fury at “the placement of American military installations in what was so recently Russia’s front yard,” Gardner can’t understand why the project would go ahead “if it’s not absolutely necessary”—which nobody has yet managed to convince him it is. Unfortunately, he concludes, “in some very powerful circles, missile defence is the solution … no matter how the world changes.”

And finally, if you’ve read every single other opinion column in Canada and in all other countries whose languages you speak, and then exhausted your local supply of bathroom graffiti, here’s Jeffrey Simpson‘s embarrassingly slapdash attempt in the Globe to explain why Toronto sports teams are perennially mediocre.