Must-reads: Randall Denley on paying attention to the Dippers and Greens; Jonathan Kay on Gilles Duceppe’s plight; Greg Weston on maternity leave for the self-employed.

Bring out your dead!
In which Gilles Duceppe forlornly searches for the last 28 diehard separatists and Lehman Brothers employees haggle for discounts on dented soup cans.

Quebec Premier Jean Charest may privately prefer a Stephen Harper win on Oct. 14 to a Stéphane Dion win, Don MacPherson writes in the Montreal Gazette, and word has it the Liberal apparatus in Sherbrooke is actually working to get Tory candidate André Bachand elected. But by publicly denouncing the federal government’s cuts to arts funding, and promising to lay his government’s “priorities” on the line and demand a response from Harper in advance of the Oct. 1 French leaders’ debate, MacPherson believes the Premier is attempting to eat as much cake as he can at Harper’s ongoing party in la belle province.

The Globe and Mail‘s Konrad Yakabuski suggests Gilles Duceppe “has only himself to blame” for the rapidly declining fortunes of his Bloc Québécois, in that he should have realized two-and-a-half years ago “that the Bloc’s rhetoric-pro-gun control, pro-Kyoto, pro-union, pro-Afghan pullout, anti-American-was sounding increasingly foreign to voters outside Montreal,” who are now frighteningly willing, from Duceppe’s perspective, to mark their X beside the Tory candidate. As such, notwithstanding Duceppe’s well-founded fear of hats, Yakabuski thinks he probably should have taken a chance on wearing a Stetson at this year’s Festival Western de Saint-Tite. 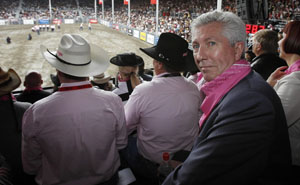 "No, no, it's a lovely hat. But I think this strange kerchief device sufficiently underscores my proletarian bona fides." (Photo: Reuters)

The National Post‘s Jonathan Kay believes a 35-year-old, out-of-print examination of nationalist revolutionaries in Quebec-Malcolm Reid’s The Shouting Signpainters-provides a trenchant explanation of Duceppe’s plight. It suggests that as much as the pie-eyed nationalists of yesteryear were fighting against “Anglo domination,” they were fighting against “the Duplessis-vintage amalgam of church and state that kept Quebecers fecund, servile and farm-bound.” As they gradually succeeded-as Quebec modernized and francophones started getting a taste of the good life-Kay says “the fundamentally humane nature of the French-Canadian character” simply overwhelmed the revolutionaries. One of the book’s “(unintentionally) comic rewards,” he writes, “is watching how the great heroes of Reid’s book-even as he is following them around, notebook in hand, seeking to dislodge pearls of their revolutionary wisdom-all proceed to get drunk, womanize, blow their money on fancy clothes, fall in love, have kids, settle down and generally embrace bourgeois life.” Duceppe, Kay concludes, is simply unable to appeal to the bourgeoisie’s vestigial nationalist tendencies.

But that’s nothing compared to how screwed Stéphane Dion is in Quebec, L. Ian MacDonald pipes up elsewhere in the Post. Readers of yesterday’s Gazette, or indeed of MacDonald’s oeuvre in general, will know what to expect.

The Ottawa Citizen‘s Randall Denley decries the mantle of inevitability the media have bestowed upon the Liberals and Conservatives as the government and opposition in waiting, to the detriment of the NDP and Green parties. The former, in particular, has been running a “policy-based campaign” (true, if you don’t count their advertisements) featuring ideas that Harper might have implemented himself had he been smart. (The Prime Minister says Layton’s $200 million-per-year “plan to expand medical schools [is] unaffordable,” Denley notes, but he’s “prepared to spend $600 million a year to reduce the price of diesel.” What gives?) If the Liberals keep tanking, he concludes, what we have here is an election to determine who gets the keys to Stornoway. At this point, he sees little “other than habit” to justify the Liberals’ claim.

“The election is one-fifth over, a Conservative majority is far from probable and only a fool would discount the formidable Liberal brand from bouncing back to keep the New Democrats at or below 30 seats,” Don Martin writes in the Calgary Herald. What’s more, Dion’s leadership isn’t “totally hopeless,” he charitably opines, polling numbers always fluctuate wildly during campaigns, and while he believes there’s “nothing to fear” in a Tory majority, he suspects various “environmental, cultural and social organizations” will soon “swing into attack mode,” which could negatively impact Tory fortunes. Still, Martin reports, the carrion-birds in the media section on Dion’s jet are licking their chops.

What ho! declares the Toronto Star‘s James Travers, wandering about the farmers market in Stratford, Ont. What have we here? Why, this charming town is “another of those ubiquitous microcosms, a precise Ontario and Canada miniature”! How positively delightful! Consider: it’s a community that’s made a living for itself off the arts as Shakespeare’s home across the pond, but that’s surrounded by family-values type conservatives who’ve never crept the boards. It’s a community that’s waiting on an as-yet unsecured $10 million in federal funding for a University of Waterloo satellite campus, and that’s fuming over those beastly cuts to arts funding. And yet, says Travers, “there are more than enough votes to re-elect” longtime Tory MP Gary Schellenberger. This, the headline suggests, is evidence of Canada’s “urban [and] rural solitudes.”

Sun Media’s Greg Weston helpfully crunches the numbers on the Tories’ plan to extend maternity leave and EI benefits to the self-employed and determines “a self-employed woman would be able to pay a maximum $833 in premiums over six months to collect up to $21,750 in benefits over 50 weeks.” This, he suspects, will be a sure-fire hit with the female voters Harper and Co. are so desperately trying to woo, and far more effective than his sweater-and-piano-based “extreme makeover.” (As former struggling freelancers, we love the hell out of the idea too.)

There’s nothing novel about Canadian political strategists borrowing a page from Republican and Democratic playbooks, Andrew Cohen argues in the Citizen, noting examples going back to the 1960s and suggesting numerous parallels-some rather dubious, we think-between John McCain’s campaign against Barack Obama and Harper’s campaign against Dion. He suggests the main difference in Canada is the sheer virulence of the attacks, “how low the parties will go and how much voters will tolerate.”

We can gloat all we want in Washington’s direction about our superior fiscal management, Jeffrey Simpson writes in the Globe. He, for example, allows himself to portray hurricanes ostensibly “intensified” by climate change and the ongoing financial meltdown in New York as appropriate symbols of the recklessness that characterized the “strange and frightening Bush years.” But, he warns, that particular cement block happens to be tethered to Canada’s ankle. And none of the party leaders has thus far suggested a decoupling strategy that meets Simpson’s exacting standards.

The Globe‘s Margaret Wente, however, seems content to look on the bright side, stock up on non-perishables and ride this bastard out, writing by the glow of her own sense of self-satisfaction. “The lawyers are happy. They will have a ton of work. McDonald’s and Wal-Mart will do well,” she predicts of the coming austerity. “And the placid little backwater where we live now looks like the very model of financial prudence.”

In the Post, Terence Corcoran prescribes caution and calm, and dismisses increasingly popular comparisons of our current plight to the Great Depression as rubbish. Alan Greenspan’s characterization of the mess as “a ‘once-in-a-century’ financial crisis” is both vague and unhelpful, he argues, “especially from a man who doesn’t appear to have seen what more than a decade of his monetary policies were inflicting on U.S. and global financial markets.” (Zing!) And while Obama’s and McCain’s duelling rhetoric on what to do about Wall Street infuriates Corcoran, he takes solace that “by the time the new president is sworn in next January, the worst should be over.” We’re holding him to that.