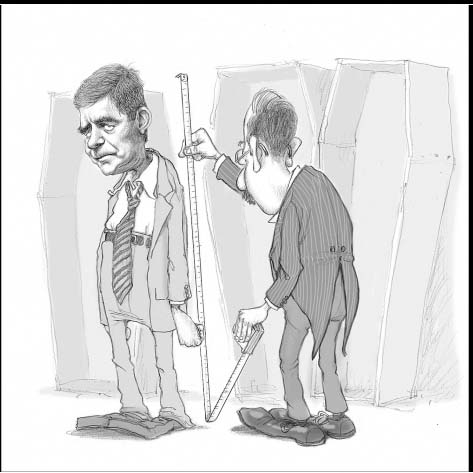 Everybody and their soft-spoken, cerebral uncle (salut, Alain!) is writing Mario Dumont’s political obituary today, and for good reason: the luckless champ from Cacouna took it on his chiseled chin in three by-elections this week. In the Montreal riding of Pointe-Aux-Trembles, the ADQ came in a distant third; in Hull, Mario’s candidate lost badly to a guy whose claim to fame was that he was once choked by Jean Chrétien on live television. Indignity, thy name is Dumont.

In my very humble opinion, though, the ADQ loss in working class district of Bourget was by far the most telling, as it was here where the party flogged its ‘immigration is bad’ campaign that worked so well during the last election. In Bourget, Mario scapegoated immigrants once again, and he lost because of it. Badly.

By now, the adéquiste formula is familiar: throw out some alarming statistics about the death of French in Quebec, suggest immigrants are to blame, and voila! You are instantly the keeper of so-called ‘Quebec values’, and people will flock to the ballot box for you in droves. Never mind that equating the precarity of French and the influx of immigrants isn’t only the height of cynicism, it’s flat out wrong. The use of French by immigrants in the workplace, a recent Statistics Canada report indicated, has actually increased substantially in the last five years.

Slogans, though, not statistics, rule the day during elections, and Mario had a doozy of one on his campaign signs. “Decline of French in Montreal — result of the PQ and Liberals — an increase of 22 percent in immigration.” The ADQ promised a creepy-sounding ‘pro-natalist policy’ (more babies, as long as they are de souche) and a freeze of immigration. It doesn’t really get anymore blatant than this.

It’s easy enough to see why the ADQ brain trust thought this tact would work. Bourget is historically one of the whitest and poorest urban electoral districts in the province, if not the country. It’s Camille ‘father of Bill 101’ Laurin’s old riding, which gives an indication of the political and linguistic bent of the locals.

But, boy, did it ever not work. Instead of chomping at Mario’s race bait, the people of Bourget voted overwhelmingly for a black immigrant from Cameroon named Maka Kotto – who as an actor, film producer and politician has arguably done more for the promotion of the French language than Mario Dumont himself.

After years of appealing to the baser fears of the Quebec electorate, it seems Mario Dumont has to head back to the drawing board. With any luck, he’ll take his campaign signs with him.