Mitchel Raphael on Helena, Rahim, and their new baby, Zavier

Rahim Jaffer has a new job 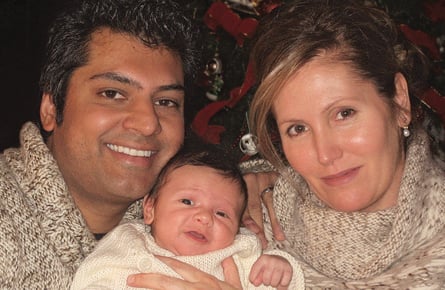 Rahim Jaffer has a new job

2010 was a tumultuous year for Independent MP Helena Guergis and her husband, former MP Rahim Jaffer. Drug charges against Jaffer were dropped, but allegations of unregistered lobbying consumed the couple’s life. The year ended on a happy note, though, with the birth of their first child, Zavier Rahim Nizarali Guergis Jaffer, on Dec. 15, an important date in the Jaffer family. Both Rahim and his grandfather, Abdul Sultan Jaffer, were born on that day. On the downside, Jaffer quips that he will no longer be able to have his birthday parties at hip clubs like the Mercury Lounge in Ottawa, and that now the parties will be at places like Chuck E. Cheese’s. Jaffer says losing his seat in the last election was a mixed blessing. If he hadn’t suddenly been able to be flexible with his time, he feels he and his wife would not have been able to have a baby. “I get to be Mr. Mom,” jokes Jaffer, who so far has been the one doing more of the diaper duty. After getting sprayed more than once, he says the couple has invested in what Jaffer calls “dunce-cap-shaped cloth cones,” which are placed over the baby while he is being changed.

Half the baby’s room is painted a slightly dark shade of sky blue and the other half is cream-coloured. (Not exactly the blue and white Conservative party branding, but in the same family.) The colours were picked by Guergis. Decals of turtles, tigers and frogs adorn the walls. One of the best gifts they have received, says Jaffer, is a set of Dr. Brown’s baby bottles that slow down the flow of milk and help eliminate gas. Guergis’s mother gave Jaffer The Joy of Fatherhood: The First Twelve Months by Dr. Marcus Jacob Goldman, and it’s been his bible.

Guergis will be back in the House when it resumes Jan. 31. She is breastfeeding the baby and pumping milk so Jaffer can feed Zavier when she is away. They are also using some formula. Before the baby was born, the two attended a three-hour breastfeeding course at the Ottawa General Hospital and a CPR-for-children course offered by the Red Cross. The night before Zavier was born, several Conservative MP friends were over at the Guergis-Jaffer house for a baby shower. About an hour after the last guest left, Guergis’s water broke.

Once the baby is old enough, Jaffer says he will bring him to Parliament Hill for feedings. As an Independent, Guergis does not have House duty, but she tries to be present for question period and all votes. The couple says there has been an outpouring of support from loyal friends and even from strangers who read about their turmoil in the press last year and sent baby gifts. Many of the neighbours got to know Jaffer and Guergis when the media was camped outside their Ottawa home last year. One neighbour knitted the baby a sweater that is so cool Jaffer was hoping he could get an adult version.

Jaffer plans to spend most of his time with the baby to allow Guergis to focus on getting re-elected whenever the next election comes. He notes that running as an Independent is a lot more work. And it doesn’t look like the Prime Minister will be welcoming Guergis back into the Conservative party any time soon. While the couple received a congratulatory flower arrangement from Michael Ignatieff and Zsuzsanna Zsohar, Jaffer quips they are still waiting for something from Stephen Harper.

Gail Shea, minister of fisheries and oceans, recently returned from a 48-hour trip to China where she sealed a deal to open the Chinese border to seal products. While seal fur was already allowed to be imported into China, the deal opens the market to edible seal products like meat and oil. Chinese officials treated Shea to a 12-course dinner, which Shea appreciated “because you get to try all the things,” including fish soup with corn. When it comes to her own seal products, Shea owns a seal brooch and sealskin gloves.