Bev Oda on three mementoes from her life as MP 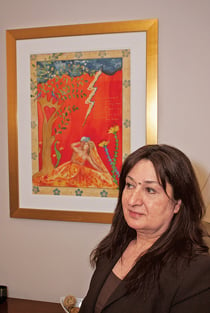 The perils of door knocking

Quebec NDP MP Dany Morin has been spending his summer going door to door collecting signatures for a petition he plans to present when the House resumes in the fall. He wants the government to set up customs at the Bagotville airport in his riding of Chicoutimi-Le Fjord. Morin says this will allow for international trips and save people from travelling to Montreal or Quebec City. He says even constituents who support Stephen Harper want the airport upgraded to handle international flights. Morin has been door knocking with a 19-year-old summer intern. Morin himself is only 26. As they approached a group of men heading out for a fishing trip, Morin had to explain that despite his youthful appearance he was in fact their MP. The fishermen told Morin and his aide they thought the two were Jehovah’s Witnesses because they were both well-dressed young men. “We thought you were going to try to convert us,” they quipped. Once they realized what Morin’s true mission was, they happily signed the airport petition.

Why Oda is keeping the soccer ball

Bev Oda, the former minister for international co-operation and the Canadian International Development Agency (CIDA), cleaned out her offices at the end of last month. She gave the Prime Minister her letter of resignation the day after the House rose in the spring, two months after the $16-orange-juice scandal exploded in the media. It was decided to make it public after Canada Day. The PM “was very gracious,” says Oda.

At five years, Oda was Canada’s longest serving CIDA minister. She is keeping three mementoes from her time in office. The first is a special red cup used in the World Food Programme’s campaign to feed starving schoolchildren. The second is a pennant and scroll that indicates she is a member of the Kandahar Cigar Club. While she smokes cigarettes, Oda admits that when it comes to cigars, “I’ll just take a puff or two.” The third is a soccer ball from Right to Play, an organization that uses sports to help children in developing countries. Right To Play’s CEO is Johann Olav Koss, a former Norwegian Olympian once married to former Liberal MP Belinda Stronach. Oda says Norway tried to get Koss to move his Canadian-based organization to their country. Oda sat down with him and asked what he needed to do to make sure it remained in Canada. She says CIDA provided funding.

The day Oda announced she was retiring, former Liberal MP and CIDA critic Glen Pearson sent her a very nice note. He never asked her any questions in question period, preferring personal chat and private diplomacy to suggest ideas. Pearson says Oda always told him what she witnessed when visiting many of the devastated countries receiving Canadian aid. Says Pearson: “She really was someone who got bent out of shape with what she saw. She was quite emotional. I believe she cared for these people she helped.”

Oda is in the process of selling her Ottawa home. It has two bedrooms and a large yard that she needed for her two dogs. Her home in her riding of Durham, Ont., is on seven acres so the dogs were used to having a lot of space to run around. She plans on getting rid of some of her political attire and truly retire so she can focus on one of her passions: gardening. “It’s hard to do your garden in high heels,” she jokes.

When NDP MP Jean Crowder was in Toronto for the re-election of Shawn Atleo as the leader of Assembly of First Nations, Tory Sen. Salma Ataullahjan took her for dinner. Ataullahjan sits on the Senate Standing Committee on Aboriginal Peoples and Crowder is the NDP critic for Aboriginal affairs. The pair went for Pakistani cuisine at the Lahore Tikka House. On the wall was a photo of Jack Layton. “They really loved him here,” said Ataullahjan. The restaurant is located in what is often referred to as Little India and is in Layton’s old riding. The two realized it was actually the late NDP leader’s birthday that day. When they told the restaurant staff they came to the table with their special birthday drum and did their take on Happy Birthday in Layton’s honour.