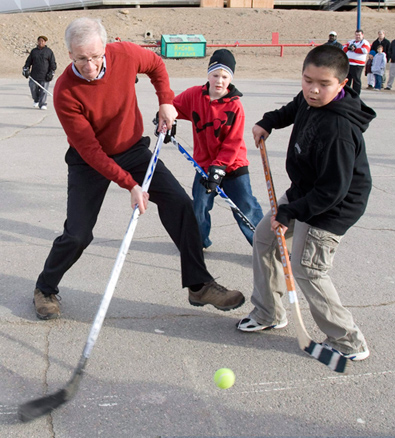 The latest Canadian Press/Harris Decima poll shows Conservative support taking a sharp dive, likely as a result of Stephen Harper’s hands-off approach to dealing with the economy. Liberal support, on the other hand is on an upswing, though Stéphane Dion’s team remains far behind Harper’s.

Stephen Harper, making a vague pledge to act on the economy should he deem it necessary: “We have other plans, other proposals, if we have to help the banking system if there are problems in the rest of the world that affect us. But I think we’re in a better position than others. I am optimist, but I think I am also a realist.”

Jack Layton, on Brig.-Gen. Mark Carleton-Smith’s grim assessment of the military mission in Afghanistan: “I’m heartened by the words of this senior military commander who is adding his voice to those many, many Canadians and others around the world who believe that the prosecution of the continued war effort has got to be changed.”

Gilles Duceppe, a day after calling Stephen Harper a “liar,” a “cheater,” and a man who “lacks both judgement and a moral sense” during a stump speech in St-Hyacinthe: “I don’t want to demonize [Harper]. Everything I said was based on fact.”

It’s hard to think of it as a simple gaffe, but the spate of vandalism targeting Liberal supporters in Toronto is easily the most deplorable scene of the campaign so far. Along with leaving anti-Liberal graffiti on neighbourhood homes, vandals cut the brake lines of several cars in the city’s St-Paul’s and Parkdale-High Park ridings over the weekend The only apparent link between the victims was the presence of pro-Liberal signs outside their homes. There are no indications those responsible are affiliated with one party or another; however, should evidence of a link arise, the perpetrators will have done irreparable harm to their party’s campaign, not to mention the damage they’ve already done to the democratic process itself.

Stephen Harper is campaigning in Ottawa, Montreal and Toronto.

Stéphane Dion is out west, with appearances scheduled for Sidney and Victoria, B.C.

Jack Layton, like Dion, is in British Columbia, where he’ll visit Vancouver and Surrey.

Elizabeth May is campaigning in her Nova Scotia riding of Central Nova.

Gilles Duceppe‘s tour will take him to Montreal, Sherbrooke, and Magog.