Today, Monday, is the big day: the 50th anniversary of the opening of the Rogers Pass in 1962, which effectively opened the Trans-Canada to traffic across the country.

I’ll be on CBC radio this afternoon talking from the summit of the Rogers Pass with hosts across Canada about the significance of the Trans-Canada. Listen in to your regional show to hear what I have to say about the highway, my drive and this blog. And be sure to read here tomorrow to find out all about the anniversary.

THEN: (Frank, B.C.) The original pathfinders in 1912 could not follow a road anywhere near the current Trans-Canada – it just didn’t exist. Instead, Thomas Wilby and Jack Haney stayed south of Calgary and headed west from Lethbridge, Alberta, but they needed a guide to point them in the right direction. As driver Haney wrote later in Motoring magazine: 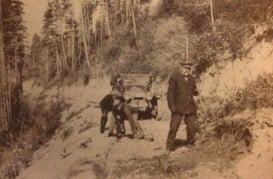 Finding a path for the REO through the mountains

“The road winds in and out, up and down. Our pilot suggested a hinge in the centre of the car to facilitate making some of the turns. Near Frank, we narrowly escaped going into a torn out bridge. We had lost the road and were playing blind man’s buff around some large stones. We finally came to the conclusion that we were getting no nearer Vancouver so we stopped to collect our few remaining wits and look around. Our guide climbed out of the car and went prowling off into the dark, but soon returned with the information that a light could be seen around the hill behind us. We soon had our directions again and found that we were only a quarter of a mile from a small town and three miles from Frank.”

Ten years later, Percy Gomery and his wife the Skipper followed a similar route along a narrow, mountainside road, recounted in his book A Motor Scamper ’Cross Canada:

“Spurting up a hill both steep and high, we found ourselves tossed on to a narrow ledge of a precipitous, shrub-grown hillside. Here, clearly, passing another vehicle was impossible. A quarter-mile of such road sounds a short drive, but it is a long time to hold one’s breath! We drove fully that distance with chances of turning out quite hopeless. Then appeared a man on horseback, seemingly a cowboy, though I have never been sure. Passing room for even an equestrian was out of the question….

“Laying the end of the reins smartly on his horse’s flank, the rider forced his animal about twenty feet up the steep incline, turned to face us and scornfully switched his arm westward ordering me to proceed. Although I did this very cautiously, the manoeuvre was too much for the prairie steed. Just as we came underneath, he became frantic and, first plunging, then rolling, he came down on our little car, smashing the mudguard, one headlight and a few more ornaments of out mantelpiece. The rider was thrown heavily, his legs being well under the front axle when the car stopped. The horse had scrambled up and made off down the trail ahead of us, bleeding freely from a long cut in the hind quarters. The cowboy, his very muteness declaring his rage and humiliation, leaped to his feet and ran after the beast…”

NOW: (Banff) An estimated 74 million tonnes of rock slid onto the town of Frank in 1903, obliterating the community and killing 80 of its 81 residents. This month, a torrent of mud the size of a football field slipped down from the mountainside and buried the Trans-Canada Highway just west of Banff. Hundreds of people were inconvenienced when the road was closed for cleanup; nobody was hurt. 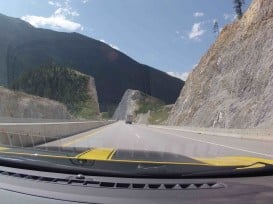 At the entrance to Kicking Horse Pass

Mudslides and avalanches do kill people here, but they’re better controlled then ever before, just as communities are better designed than they’ve ever been. But even so, the ones that do the damage are rarely anticipated.

We drove through Kicking Horse Pass today, the highest point of the entire Trans-Canada Highway at 1,627 metres (5,338 feet). Its two lanes are relatively narrow and it has tighter 40 km/h curves than the Trans-Canada near the Cabot Trail in that I questioned in Nova Scotia. There are chain-mail sheets hung high beside the road to catch falling rocks. The road is downright dangerous for bad drivers in poor weather, but on a blue sky day like today, it felt safe, secure – and marvellous.

SOMETHING DIFFERENT: (Canmore) Last month, I ran a contest on my Twitter account (@WheelsMark), asking followers to send me their Trans-Canada roadtrip stories. The winner was Jeremy Kroeker in Canmore, and I met with him over dinner last night to give him $100 in gift cards for East Side Marios restaurants. 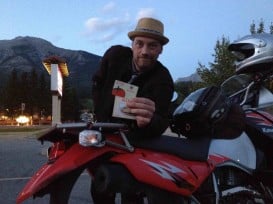 His winning entry is here, but it’s not too late to send me your own family roadtrip story for another $100 in gift cards at East Side Marios. No more than 300 words, please, and send it to me directly at markrichardson888@gmail.com. Entries close at the end of this coming weekend.

My old Chevy S-10 would not start. After two days of bone-shattering cold in Canmore, Alberta, the battery was dead and you couldn’t dent the oil with a chisel. CAA sent someone out that night, but it was hopeless.

I needed the truck in the morning, though. I had promised to meet my parents in Medicine Hat, Alberta.

The truck lacked a block heater, so I set up my camp stove under the oil pan to blast it with fire. My friend Tom connected a battery booster. Soon the engine turned over, but it still wouldn’t catch.

Tom had a solution, though – ether. He opened the air filter and sprayed into my injectors. The can hissed while I cycled the ignition.

I had just leaned out of the window to remind Tom about the stove when the night lit up with a “WHOOOOF!” I imagined Tom with a freshly blackened face, still bent over the engine. But he was ok so I kept cranking.

Except, now my engine was on fire. I jumped out to help Tom throw snow on everything. After that we stood there, just staring.

“I think we almost had it,” said Tom.

I got back in the cab and Tom kept spraying ether until the engine started.

The truck made the trip the next day and I met my parents, but on the way back there was a horrible knocking. I called a few mechanics who all agreed that the cost of repairs would be greater than the value of the truck.

So I tried driving home, but the truck finally died along the Trans-Canada Highway. I called CAA again. Then I sold my S-10 to a tow-truck driver from Brooks, Alberta for $2 – which is less than I paid for the can of ether.

SOMETHING FROM TRISTAN, 12: (Canmore, Alta.) Yesterday was great because we went white water rafting for about two hours. It was so fun because there was great scenery, lots of drops, and even lots of little nooks and crannies for us to do cool stuff like flip the boat. 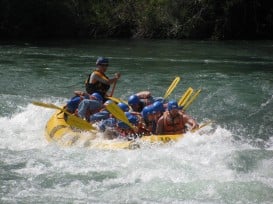 Getting wet on the Kananaskis River

I think that by far the best part was that I got to use the water gun that was at the bottom of the raft to squirt other people. At the end of the ride we also played a game called trust where basically you use the T-grips at the end of your paddle to hook onto someone else’s and lean back as far as you can and see if the person tries to let go. My dad tried to let go but I stayed in the boat so he just pushed me in with his paddle.

We also tried to climb up on an iron bridge so that we could jump off but my dad pulled me down into the water. After the ride was over we were all treated to pop and cookies, which was great if you ask me.

We have also been going through the beautiful Rockies, which is fantastic because tonight we are in a hotel room that looks right out over the Rockies. And tomorrow is my dad’s birthday and I have a special gift for him so I’m excited to see his face tomorrow.