My favourite food moments on film

Sometimes it's the non-foodie movies that really strike a gastronomic, and nostalgic, chord

The TIFF Bell Lightbox has a new film series starting this week called Food on Film. Some fantastic movies, including Babette’s Feast and Vatel, will be screened with some big personalities, like Laura Calder,  leading discussions with audiences prior to showtime (it’s in partnership with Oliver and Bonacini and the Food Network.)

After reviewing the line-up, I realized that some of my favourite film moments involving food come courtesy of movies that don’t rely on gastronomy as a plot or a setting. Don’t get me wrong; I enjoy watching Julie & Julia, Mystic Pizza, Big Night and the action-packed My Dinner with Andre just as much as the next food-obsessed film buff.  But the food movie moments that stand out especially for me all take place in the background, which, I suppose, is sort of like the role food plays in real life. It’s often in these moments, which may or may not include some sort of intoxication, when The Good Life unfolds. If it happens around a dinner table, then I’m in. 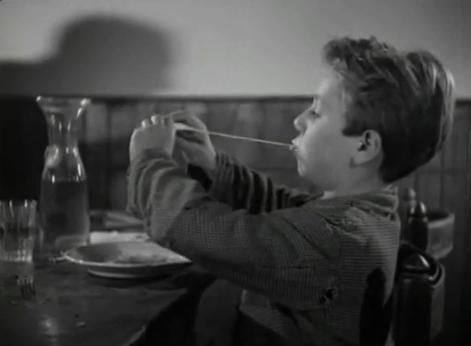 Take The Bicycle Thief; Antonio Ricci promises his son Bruno some pizza after they’ve had a fight, but the pair end up at a restaurant that doesn’t serve it. So Antonio orders mozzarella in carrozza—deep-fried bread stuffed with cheese—for him and his boy, plus a litre of wine. It’s clear that the poor pair don’t belong in the place. Children cast disparaging glances at them. But Bruno eats his meal with gusto while his father, financially desperate and ready to crack, watches on. In that moment, they are content. The idyll doesn’t last, and that’s the part that breaks your heart. 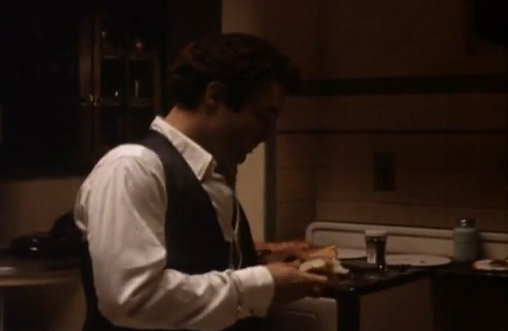 And talk about getting to know a character by the way they eat. Remember that scene in The Godfather when Sonny goes into the kitchen to tell his mother, who’s attending to a pot of sauce on the stove top, that “Pop”, her husband, has been hurt, only they don’t know how bad? And she just calmly unties her apron, and exits, as though the moment was anticipated? (You might not; the scene was cut, but hear me out.) Sonny walks over to the stove, rips a piece of crusty white bread and gives the pot a wipe, like he’s probably done a thousand times before. There’s something so funny, and so tender, about the scene. I mean, this is a pretty serious moment for Sonny, and the mobster heir apparent does consider the gravity of it all as he walks into his old man’s office, looks at the empty chair and consciously decides not to sit in it, but he does it all while gnawing away on a piece of bread covered in sauce. Hey, he was hungry. 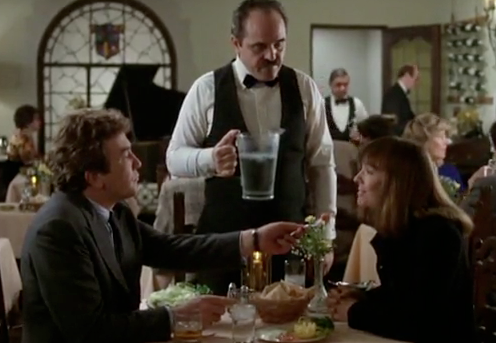 For me, there are moments when food can intimate intimacy just as effectively as a touch or a glance. In Shoot the Moon, Albert Finney and Diane Keaton play a couple with four kids who are going through a divorce.  But there’s a moment when the two meet up by chance, after several months of separation, at the same restaurant. Finney tries to order for her. She tries to order things that she wouldn’t normally choose. He tells her that she won’t like it. He feeds her food from his fork. She picks away at his plate. They become so habitual that dinner descends into a yelling match. They’re oblivious to the other diners. It’s a really visceral scene that oozes with the sort of familiarity we share only with those who know us best, and occassionally let us get away with bad behaviour. 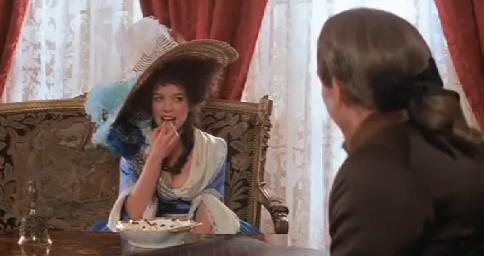 And then, of course, there’s the sensuality that comes with food. It’s subtle, but there’s a scene in Amadeus when Mozart’s sweet, naïve young wife, Constanza, visits Salieri to show him some of her husband’s unpublished scores in order to secure him some much needed work, and Salieri offers her some capezzoli di Venere, or nipples of venus. It’s the way this bosomy beauty eats the Roman chestnuts in brandied sugar, nipple after nipple, that’s so provocative—even more so than when she takes off her top. (Apparently the actress, Elizabeth Berridge, didn’t know that she was allowed to spit after each take. She consumed so many nipples, which were pretty much 100 per cent marzipan, that she threw up.)

And then their are the food scenes that I adore simply because they drip with childhood nostalgia; sculpting a pile of  mashed potatoes with my fork, just like Richard Dreyfuss did in Close Encounters of the Third Kind; and wanting to eat TV dinners only because the food compartments reminded me of those you always see on space ships, like in Aliens when the crew sits down for their first meal after space hibernation. But the furthest I ever took a food film scene obsession was in grade five when I dragged my friend Kari and her scraggly little dog Princess on an adventure along the train tracks just outside of town. Armed only with a pack of matches, a couple bottles of Coca-Cola and a package of Frank’s Red Hot wieners, I was determined to recreate the campfire scene in Stand By Me. (They actually ate hamburgers, moulded around their sticks, but the Red Hots were a good substitute.) Even though it was daylight, and the tracks were probably only a kilometre away from home, I was aching to authenticate the moment—to break bread, or wieners, and share stories, and have adventures, and say swear words, and have nothing else matter in the world except your best buddies.

Anyway, I’ll definitely go to the Lightbox to watch Vatel. Nothing makes me happier than watching Gérard Depardieu eat.

FILED UNDER: Amadeus best food scenes food on film Shoot the Moon Stand By Me The Bicycle Thief The Godfather TIFF Bell Lightbox