Don't call it a snake 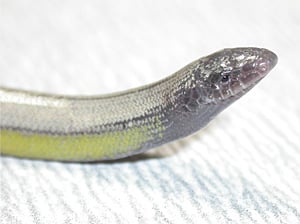 The Los Angeles Airport, or LAX, is one of the busiest airports in the world. It’s also home to a newly discovered species of legless lizard.

Biologists in California discovered the reptile at the end of one of the airport’s runways. It is one of four new species of legless lizard found in the state. The findings were published in Breviora, a journal published by the Museum of Comparative Zoology at Harvard University.

The three other new lizard species were located in regions that would seem similarly difficult to inhabit. This included: in a vacant lot in downtown Bakersfield (a city north of Los Angeles), among oil derricks in the lower San Joaquin Valley and on the edge of the Mojave desert.

The new LAX lizard is greyish-purple with a yellow belly. It was named A. stebbinsi, in honour of Robert C. Stebbins, a 98-year-old Berkley herpetologist (a zoologist who specializes in reptiles and amphibians).

“This shows that there is a lot of undocumented biodiversity within California,” says Theodore Papenfuss, a herpetologist, in a release put out by UC Berkley.

The legless lizard looks a whole lot like a snake, but Discovery News writes that the reptile has “eyelids, external ear openings, lack of broad belly scales and/or a very long tail” that differentiate it from a snake.

Legless lizards are seldom seen in the wild because they burrow underground. In fact, their leglessness is actually an adaptation that they developed millions of years ago in order to burrow better.