New York City has a plan for its rats: sterilize the females 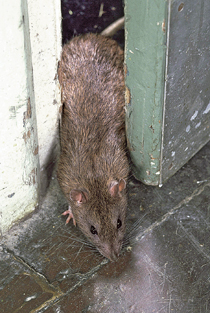 There are a lot of rats in New York City and, as anyone who has ridden a NYC subway can tell you, the rodents like to make their home in the underground tunnels of the Metropolitan Transport Authority.

Now, the transport authority has a new plan to get rid of the resilient pests, which even Hurricane Sandy couldn’t conquer. The authority is going to sterilize them.

According to a report from Bloomberg Businessweek, the transport authority has hired Arizona pest-control company SenesTech, which has developed a product that will render female rats sterile when it is ingested. It works by speeding up egg loss and it can make a female rate infertile within days, an important feat when mother rats can have up to seven litters each year.

The problem SenesTech will likely encounter is getting the rats to eat the poison when there is so much other food waste readily available for the rats to munch on. This is why the company thinks that offering the rats liquid, to wash down their daily feast of pizza crusts and stale popcorn, may be the best approach.

“Here in New York, rats have such a buffet available to them,” SenesTech chief executive officer Loretta Mayer told Bloomberg. “But they don’t necessarily get a lot of liquid, which is why we’ll be offering them … a semi-solid covered in kind of a cheese wax and also liquid from a bottle feeder—They’ll have a bite to eat and a glass of wine, you know?”