Does the Times have more dirt on the mayoral candidate? 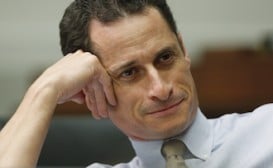 What exactly does The New York Times have on New York mayoral candidate Anthony Weiner?

It’s a question many observers are asking themselves after the newspaper seems to have prematurely published a story about the once-disgraced congressman online Tuesday, which it took down moments later.

From what observes have gleaned, the story seems to revolve around one of the women involved in the scandal that forced Weiner to resign from Congress in 2011. To refresh your memory, Weiner sent a picture of his crotch to a college-aged woman on Twitter. The woman was not his wife. He then lied about the picture, before coming clean and stepping down.

The New York Times story that was published had the titled: “For Women in Weiner Scandal, Indignity Lingers” and was by Michael Barbaro, reports Politico.

A production note on the page now says that the story was posted “inadvertently, before it was ready for publication.”

A Google News search still brings up the first line of the story, which reads:

Customers still taunt Lisa Weiss. “Talk dirty to me,” they joke. “We know you like it.” Colleagues still refuse to speak with her. Strangers still bad …

The Atlantic Wire reports that this text was also published:

For those on the other end of Anthony D. Weiner’s sexually explicit conversations, the episode damaged careers, disrupted educations.

Weiss was one of the women involved in the Weiner scandal, a Vegas blackjack dealer who was found to have sexually explicit Facebook chat conversations with the then-congressman.

In late May, Weiner announced that he would run for New York mayor. Even before his announcement, he mounted a comeback tour of sorts, doing interviews in which he apologized for past behaviour. And, depending on what’s in that New York Times story, Weiner could have even more to apologize for when the full story is published, presumably in the days to come.