SF: Welcome to Week Seven of the NFL season – or as it’s known throughout the league: the 41.1764th percentage point juncture of the NFL season. What follows is our weekly attempt to gaze into the future and, without benefit of sorcery, clairvoyance or rational thought, discern the outcome of sporting events before they transpire. Also to see if I can make it through at least one week without mentioning Bea Arthur.

Let’s begin with a poll:

[polldaddy poll=1007797]
Dallas (minus 6.5) at St. Louis
SF: Pacman Jones went missing for 36 hours after he was suspended at least four games for engaging in an “alcohol-related physical altercation.” I don’t know what the big deal is – I had one alcohol-related physical altercation in university and the only punishment I got was chlamydia. [Rimshot!] Thank you. Thank you very much. Meanwhile, Tony Romo wants to play with a broken pinkie. That would be a heroic act if it didn’t include the word “pinkie,” which kind of ruins it. Pick: Dallas.
SR: All my alcohol-related altercations have ended up decidedly non-physical. With one exception that a sealed court order prohibits me from discussing in public (all I can say safely is that if I had done anything really wrong, wouldn’t I be behind bars by now). The Cowboys are a total circus right now. As for Romo, why can’t they call it a blue-y? At least a blue-y sounds like it’s for boys. Pick: Dallas.

Minnesota (plus 3) at Chicago
SR: As predicted correctly by me (take a photo of that sentence fragment – it’s rarely seen), Chicago lost last week to Atlanta. Those looking for a silver lining should switch to a less valued metal like copper. Or Rex Grossman. A late-game rally notwithstanding, Kyle Orton has shown he can’t get it done in the fourth quarter. Chicago keeps losing close. And their running game is more of a “stand still and be tackled really hard” game. With this spread and that gunslinger Gus Frerotte back there for Minny (sarcasm alert!) expect the Vikes to win this game. Pick: Minnesota.
SF: I don’t know about that buddy – I’m not saying Minnesota’s offence is impotent these days but rival defences keep gently stroking its arm and telling it that this happens to all the offences. Pick: Chicago.

Detroit (plus 9) at Houston
SF: Shocking news out of Detroit – no, not the part about Jon Kitna being out for the year and the offence being in the hands of a quarterback who very suavely ran directly out of his own endzone for a safety last week. I’m talking about fact that the Lions fleeced Jerry Jones in a trade, getting three draft picks, including a first rounder, for Roy Williams. Matt Millen would have settled for a ball of string and whatever was in the shiny box Jones was dangling in front of him (ie. a second ball of string). Pick: Houston.
SR: I can’t believe you blew past that incredible effort from Orlovsky. Dude made one of the all-time boobalicious plays ever. Motor City’s Safety Dance. I have been puzzled for the past few days however as I download the vid from YouTube constantly and wonder how it could have even happened. And I’ve realized something that no one else has yet – it was intentional. He thought it was the right thing to do. And small wonder. Look at this freeze-frame from Lions game tape. Pick: Houston. 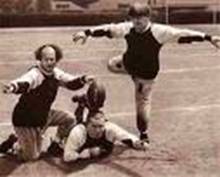 New Orleans (plus 3) at Carolina
SR: Right about this week would be the perfect time for Jeremy Shockey to show that he’s not the world’s biggest reverse rabbit’s foot and play a huge game coming off of injury. The Saints finally put it all together last week. If Brees has a healthy and dominant tight end to help him, he could be deadly. The challenge of course, is that Carolina does not like to give up points or yards. So it should be New Orleans’ offensive strength vs Carolina’s defensive strength. A great match up. My head tells me to go with the Panthers D. My heart tells me to with the Saints O. And my gut tells me to go with the ribs plus mashed with gravy. Pick: New Orleans.
SF: The only body part I ever listen to is my left knee, which seizes up when the weather gets damp, when there’s trouble down at the old mill and when all 11 members of the Panthers’ defence land on it simultaneously. Pick: Carolina.

Tennessee (minus 8) at Kansas City
SF: Larry Johnson of the Chiefs has been suspended for this one “for violating team rules.” Word is he was caught in possession of talent. Pick: Tennessee.
SR: A trumped up charge if ever I saw one. There’s no more talent in that dressing room than swear words in church. Pick: Tennessee.

San Francisco (plus 10.5) at New York Giants
SR: Watching O’Sullivan fumble and throw away the ball during last weeks’ choke to the Eagles, I was reminded of the song, “You’re Shitastic!” (A b-side hit for Isaac Hayes in the early 1970s, it was eclipsed by the theme to Shaft). The Niners are killing me this season. They usually put in about 2.5 solid quarters of work per game. And for the other 1.5 quarters, they simply go into the drunk tank. The Giants were made human by Cleveland last week. But they’re the real thing – like Coke or neck kisses from Scott Feschuk. The Niners will lose this game, of course. But they will cover the spread. Pick: San Francisco.
SF: Nah, this is a classic We Got Our Asses Handed To Us Last Week By A Sub-Par Team So Now We’re Going To Force This Other Sub-Par Team Not Only to Reattach Our Asses For Us But Also to Remove THEIR Own Asses, Politely Hand Them to US and For Good Measure Go Fetch Us a Coke game. Pick: New York.

San Diego (even) at Buffalo
SF: Trent Edwards and Roscoe Parrish will play, which is good news for the people of Buffalo. In fact, the city of Buffalo has been having a real run of good luck. Just last week, several residents remembered that they could be stuck living in Detroit instead. Pick: Buffalo.
SR: Sure, Trent Edwards will play. But after that hit last week he thinks his name is Beatrice and isn’t it lovely that all these men are running toward him. Buffalo has had a wonderful run. It hits a bump this Sunday. Pick: San Diego.

Pittsburgh (minus 9.5) at Cincinnati
SR: Let’s see. Pittsburgh is coming off a restful bye week. They’ve got a bona fide star quarterback, an impressive running game, a strong secondary and a winning record. On the other hand, Cincy has a quarterback named Ryan Fitzpatrick – which, other than being the punch line to a not-really-that-funny joke about Scottish homosexuals is not really much to bet your money on. Pick: Pittsburgh.
SF: I was reading on EPSN.com that Cedric Benson may soon steal away the starting RB job from Chris Perry – but first he needs to finish mastering the Cinci playbook. It’s not as easy as it seems: Benson can never remember whether the three-and-out comes before the fumble or how many times he’s supposed to rush for a loss before the QB hurls an interception. Pick: Pittsburgh.

Baltimore (plus 3) at Miami
SR: I’m picking Baltimore and I don’t give a goddamn what you think! Miami isn’t a football team. They snap the ball to their running back and wear teal jerseys. They’ve got that giant gas bag Parcells and I just hate them. Always have. And now that they’re outperforming expectations, I hate them even more. Baltimore has looked dreadful but Flacco has poise (or, at least as much poise as a fellow can muster while having his testes squeezed through his mouthguard). I’m looking for a strong run defense effort from the Ravens. A strong passing performance from Flacco. And a lot of bad special teams play by the Dolphins. (I’m also looking for whatever’s left in Ricky Williams’ ashtray). Pick: Baltimore.
SF: I love how you often identify players and coaches exclusively by their surnames, like Flacco. It makes everyone in the NFL seem slightly more like Cher. (Sadly, Parcells does not need any help in this regard. He knows why.) Meanwhile, who knows what Miami has up its wacky-formation sleeve this week: the wishbone? the hambone? the milkbone? Pick: Baltimore.

Seattle (plus 10.5) at Tampa Bay
SF: Man, what a disappointment Seattle has been. They’re not just the AfterMASH of the NFL. They’re AfterMASH if every single character had been played by Jamie Farr. Pick: Tampa.
SR: Sorry, but AfterMASH references still get Gary Burghoff’s blood up. That show would have been a smash with Radar. Idiot suits at CBS! Interesting coincidence, one of Gary Burghoff’s hands was severely handicapped – much like both of Matt Hasselbeck’s. Still, they have to win sooner or later. Pick: Seattle.

New York Jets (minus 3) at Oakland
SR: two teams headed in opposite directions. The Jets are headed forward with an aged quarterback. And the Raiders are headed Hades-ward with an aged incubus-owner. I feel safe in saying that the only way the Jets will lose this game is if Oakland scores early and then gets Hiro to push everyone forward in time. That probably won’t work either – he’s also having a shit season. Tune in next week when I reveal the ancient spell that will strip Al Davis of his powers and send him back to his home-dimension. Pick: New York.
SF: Wow, a Heroes reference. And you have the nerve to mock other people. Did you catch the highlights of Tom Cable’s debut performance as Raiders’ coach? I’m trying to find a way to describe the look of fear, anxiety and severe not-knowing-what-the-hell-to-do-nextness. Here, do me a favour, Reid: Walk to you bathroom. Look into the mirror. Now pretend you’re out in a bar and a pretty girl just said “Hi” to you. There! That’s the face! Pick: J!E!T!S!

Denver (plus 3) at New England
SF I admit it: my enthusiasm for Matt Cassel is starting to wane. He doesn’t manage the game very well. He panics in clutch situations. Worse still, his chin is relatively cleftless. Pick: Denver.
SR: But his belly is dappled like a mare’s hind quarters. Look, I don’t know what it’s going to take – massive losses, embarrassing results, a falling piano – before the Pats realize that they need a better quarterback. Randy Moss has started placing want ads in the Boston Globe. That’s a sign, right? Pick: Denver.

Cleveland (plus 7.5) at Washington
SR: Brady Quinn is cursed. Just when it seems that a losing streak will get him a shot at the starting pivot’s job (finally), Anderson pulls a miracle effort out of his ass and beats the Giants. Back to the bench Brady (with only your good looks, endless supply of women and endlessier supply of millions to give you comfort. LOSER!). Washington is a good team that has shown character all season. So naturally, I think they’re a bad bet. Something in Cleveland’s performance last week has me believing they’re worth believing in. Course, I felt the same way about Elizabeth May. Pick: Cleveland.
SF: I’m sticking with the Redskins and not just to get on the good side of their coach, who has a surname that suggests he’s advanced reconnaissance for an interstellar alien attack force that even now is massing just beyond Earth’s orbit for swift and merciless invasion for the purposes of colonization and tremendous amounts of anal probing. Though mostly for that reason. Pick: Washington.