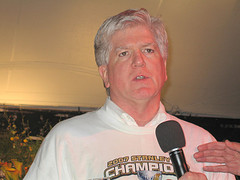 This is either an amazing put-on, or one of the best pissing matches in NHL history. Brian Burke, the man the Toronto media tirelessly inform us will be the Leafs’ next general manager, just can’t let go of his grudge for Kevin Lowe. So the Edmonton Oilers GM used a recent radio interview to answer crap with crap. The 12-month war between the two execs—Burke still being the nominal GM of the Anaheim Ducks—goes on.

Now Gary Bettman, the NHL’s tiny, imperfect commissioner, has stepped in an attempt to end the unseemly battle. In the spirit of a good linesman, we say leave ’em, Gary. This is more entertaining than a lot of NHL games (not least those mid-week snoozers out of the southeast).

Cause for anger, for sure. Except that was, like, a year ago. Yet Burke complained, and complained some more, blaming Lowe for every conceivable ill in the NHL from jock itch to the death of some mythical tradition he refers to as “the second contract.” In doing so, Burke breached the arguably more sacrosanct principle of never publicly criticizing another GM’s decisions, claiming Lowe has “run his team into the ground.” Bad, bad idea, we thought at the time. What goes around comes around, and all that; in a 30-team league, chances are you’ll be dealing with said GM some time in the future.

Or not. Lowe and Burke evidently do not talk any more, save to slag each other in the media. So here’s hoping they tell Bettman to mind his own business. Tune in for NHL Smackdown, Part IV. We think Lowe will look better in a singlet. But Burkie’s a lot meaner.