AT LEAST WE STILL HAVE MEDICARE: The reality of the Olympics is that it is just as much about business as it is sports. Parties, perks and schmoozing are the order of the day for the “Olympic Family” and the host of sponsors and their corporate guests. And like all trickle-down economies, even those at the bottom of the chain—the wretched press—eventually benefit. At every Games, journalists and photographers receive a little welcome package from the sponsors—full of things like McDonald’s coupons, notepads, pens and mousepads.

It is with sadness then, that I note that one of the most generous (at least to journalists) Olympic sponsors, Johnson & Johnson, has decided not to renew its partnership for Vancouver 2010 and beyond. One of 12 global “top sponsors”, J&J pumped an estimated $80 million into the movement’s coffers over the past four years. And let’s not forget my medicine cabinet. I still have some Greek J&J bandages, Italian J&J handcream, and a truly prize possession—a bottle of green J&J liquid that they handed out in Beijing, labelled “Baby Repellent.”

J&J’s decision wasn’t unexpected. They’re one of four Top sponsors (the other are Lenovo, Manulife, and Kodak) jumping ship. And the IOC does have nine others—deals worth and estimated $900 million—still on the hook. But with the global economy in free fall, it’s the kind of decision that the Olympic movement really can’t afford to see turn into a trend. 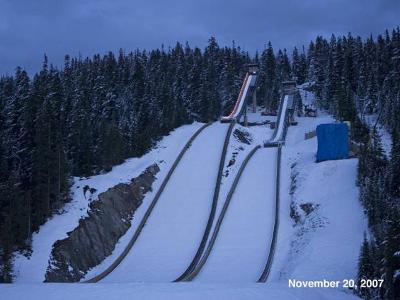 NOT GOING AWAY: A lawsuit launched by female ski jumpers against the Vancouver Organizing Committee seeking the inclusion of their sport at the 2010 Games, has cleared another major hurdle, with a hearing date now set for April 20, 2009. As the Vancouver Sun notes, however, a late decision in the women’s favour might create a major headache for VANOC with ticketing, transportation and competition schedules already written in stone. Both male and female jumpers have been practicing at the Whistler site since last Christmas.

The unexpected success of Canadian figure skaters Patrick Chan and Joannie Rochette so far this season must have visions of Olympic medals dancing in the heads of people at the COC. Now comes news that one of the top contenders on the men’s side, Japan’s Daisuke Takahashi is about to go under the knife for season-ending knee surgery. The 2007 world championships silver medalist, who finished eighth in Turin, may even miss next March’s World Championships in LA where Olympic berths will be awarded.