Peter Voser talks with John Geddes about Arctic drilling, doing business with China, and why he deserves to be paid $15 million 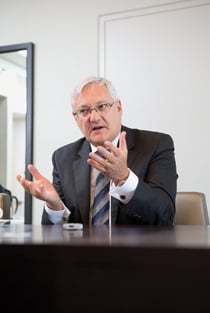 Peter Voser is chief executive officer of Royal Dutch Shell, one of the world’s biggest companies. Shell’s multi-billion-dollar investment in Alberta’s oil sands, along with its new joint venture to build a liquefied natural gas export facility in Kitimat, B.C., make the Swiss-born executive a particularly influential player for Canada’s energy sector these days. On a recent visit to Canada, Voser discussed energy and environmental matters, along with the state of the European economy and doing business with China.

Q: Last year’s decision by President Barack Obama’s administration to delay approval of the Keystone Pipeline, which is meant to link Alberta’s oil sands with Texas refineries, dramatically raised the profile of the environmental clash over the oil sands. How do you see that debate evolving?

A: Maybe it’s best to start by looking at what energy levels the world will need over the next 30 to 40 years. Demand will double. It is our assumption that all energy forms need to be developed in a sustainable, affordable way. We see oil sands as part of that mix on a worldwide basis. Therefore, it will be developed. It’s a legitimate challenge to government, and to industries, to do this in a sustainable way. If I compare oil sands today to 20 years ago, this is an industry that has made tremendous progress. That needs to be communicated in the right way.

Q: Is it possible to win over public opinion when aerial photographs of the massive mining and tailings operations around the oil sands look so ugly to so many people?

A: These are open-mining operations and therefore you have a temporary impact on the land. Reclamation of land is part of the sustainable operation of oil sands. Within the lifetime of the mine, we give the land back in a sustainable and acceptable form.

Q: After BP’s blowout in the Gulf of Mexico in 2010, public concern about offshore activity also spiked. Your company is planning to drill this summer in Alaskan waters, and Canada is contemplating Arctic drilling. What do you say to critics who contend it’s just too dangerous in such a fragile environment?

A: First, the comparison. The Gulf of Mexico is deep water and in many parts high pressure; Alaska is shallow water and low pressure. It’s a different risk profile. I think responsible operators like us have learned [from the Gulf of Mexico blowout] to further improve prevention and containment. On the prevention part, I think we have gone further than anywhere else in the world in Alaska with our safety systems, like double-blowout preventers and various other safety and security systems built in. And let’s be very clear what exploration means—drilling wells, and we’re looking at 10 in two years. These wells will be capped afterwards, and we’ll take the information we’ve gained to prepare development plans for the longer term.

Q: But opponents of developing Arctic offshore reserves say a spill in icebound waters would be impossible to contain and clean up.

A: We have tested and put a lot of money into scientific analysis on how to deal with oil spills below ice. I think today we are of the opinion that we can deal with it. That’s not necessary in the exploration phase, because we will only drill in ice-free periods. It’s a challenging environment, a challenging process. But as an industry, and also as a company, we’ve spent significant money developing technical solutions to that. These solutions over the years will improve.

Q: Canada’s federal government is pushing to streamline the approval process for energy and other resource projects. In the past, have Canadian regulatory reviews been a problem for companies like yours?

A: Canada is really going in the right direction. Let me be very clear: from Shell’s perspective, an efficient, effective, time-bound regulatory process doesn’t mean we are not going to be as thorough and as detailed as you would expect a very advanced country like Canada to be in terms of environmental impacts. What we want is certain boundary conditions so we don’t have to wait five, six, seven, eight years.

Q: Shell’s new liquefied natural gas joint venture in B.C. has PetroChina, which is owned by the Chinese government, as one of several partners. What’s it like doing major deals with China’s state capitalists?

A: I would not call them state capitalists. These are normal companies. They are keen to learn how modern companies operate and are governed. I think you would be surprised how open they are to changes. They are fast learners. There is clearly an overall steering mechanism by the state. Many times I compare it to the Western world, and I have to say: when you get a decision in China, the decision is firm and you can work with it. You might not always get that in the West.

Q: Speaking of the West, how do you assess the European Union’s prolonged crisis? Is the EU going to come apart at the seams?

A: I don’t think so. Common sense will prevail. It needs decisive actions, no doubt, but it will take time. Anybody who thinks this will be solved in the next six to 12 months I think will be proved wrong. I think the common EU market has to be defended. This is key to European competitiveness. They need to stabilize Greece, Italy, Spain. Once they have stabilization, they can move forward.

A: The EU has really no way around a major social contract adjustment. They need to go through this. It will come in stages. In order to preserve the living standards you have on average in Europe, if you want to stay anywhere close to that, you will need to adjust a few things on the labour policies, you need to start to deal with pensions, you need to deal with retirement age, average number of hours you work a week. That reform is coming and it will have to happen in order to preserve the competitiveness of European business. Otherwise I think we will be left behind.

A: Normally I don’t talk about remuneration. My salary is set by someone else. I’ve got a chairman and a board who are setting a competitive salary package, which has been approved by the shareholders. When you’re successful and these packages pay out, I find it rather disturbing that then we have a conversation about the package itself. When you are not successful, I fully agree that you should not earn your high salary.

Q: Your pay is linked to Shell’s performance.

A: In the last three years we outperformed all of our competitors. We had a 70 per cent share price increase. What I’m trying to say is it’s market-based, it’s performance-based, it’s variable-based. That’s the right form of setting incentives.

Q: What about the underlying debate about growing income disparity in so many countries?

A: Now we are really going into the philosophical discussion. I’m a market person, so for me performance is the absolute key. For our employees, they all have a market-based salary. The CEO is no different. When you grow up in Shell and you become CEO, your package in its components doesn’t change. The absolute magnitude does change, but it’s exactly the same system. That’s a key component for me.

A: Today we’re looking at oil sands [emissions] being five to 15 per cent higher than a conventional crude cocktail. The operations Shell has are at the lower end of that range. With carbon capture and storage [CCS], you can further lower that. With CCS, you don’t get it to zero per cent difference, but pretty close to it.

Q: You’re referring to injecting carbon dioxide underground rather than releasing it into the atmosphere. But at least one CCS project in Alberta has been cancelled recently as too costly. Does the concept remain economically viable?

A: Let’s lift it up to the global scale. If you want to achieve certain climate change goals, CCS has to be part of that solution. Therefore I think it’s up to industry and governments to make this happen. You need the right frameworks. You need a carbon price mechanism. You need incentives to get these projects started, to scale up the technologies. At Shell we have decided to work on and implement various CCS projects, and we don’t wait for government frameworks, global CO2 pricing mechanisms. In our opinion they will come in the longer term, but it’s about taking actions now rather than waiting for political decisions.

Q: You’ve been studying a possible CCS project in Alberta. When will you make a decision on whether to proceed with that?

A: Our project is called Quest. If everything goes normally, you can expect an investment decision on it in 2012. It would sequester a million tonnes [of CO2] in our oil sands operations. I think this is extremely crucial for the oil sands business model.