In conversation with Aaron Wherry 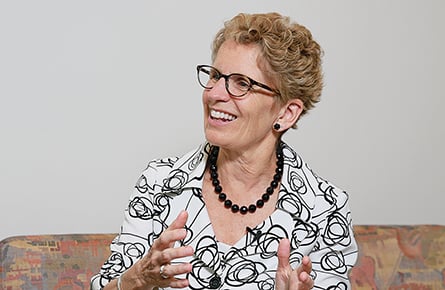 When Kathleen Wynne succeeded Dalton McGuinty as Ontario premier in February, she became Canada’s first gay premier. The Liberal also inherited a number of her predecessor’s troubles, from a massive debt load to troubled negotiations with the province’s teachers to the contentious decision to cancel two power plants that has since become a controversy over deleted emails. Wynne came to Ottawa last week to make the pitch for a national transit strategy and new investment in infrastructure.

Q: Let’s start with some of the news from this week: your predecessor testifying before the legislative committee investigating the gas-plant controversy. Were you satisfied with what he had to say? Do you feel like the issue has been put to rest at this point?

A: I was very pleased that the former premier agreed to come a second time and to clear up some of the issues around the information, the emails and so on. And I think he answered the questions straightforwardly and my hope is that the committee got what it needed.

A: Voters can trust me, the public can trust me, that I am doing everything in my power to get the information that’s being asked for. You know, it was a commitment that I made during the leadership and I knew when I was coming into this job that we were going to need to broaden the scope of the committee’s ability to ask questions about a whole range of issues. I’ve said that we made mistakes. We should not have located those gas plants in those places in the first place. There should have been a better process. We’re putting a better process in place. So my hope is that people will see that we are being straightforward and that they will have confidence in that.

Q: Have you ever had a feeling of, “What did I get myself into?” You came in with a number of outstanding controversies that you had to deal with, you’re now facing five by-elections, you’ve got a minority parliament—there are lots of reasons that this isn’t the ideal job. Have you ever thought, “Wow, this is even bigger than I imagined?”

Q: The attack ads are already running. The line seems to be that you don’t represent change—you and your predecessor are basically the same person.

A: Well, I’ve been very clear about my pride in the work that I’ve done over the last 9½ years as part of Dalton’s government and very proud of the work he did. Having said that, I came in saying there were some things that needed to change, whether it was on the processes around siting energy infrastructure or whether it is the collaboration and the partnerships that I want to form across the province. My particular style, which is collaborative, which is leading from within a team, I think that’s what’s needed right now. Clearly the party felt the same thing, so I’m going to be spending the summer doing just that: talking to people around the province and tapping into their ideas.

Q: Do you need a big issue, though? Do you need something like transit? McGuinty obviously left with education as his hallmark—is that what transportation and infrastructure can be for you?

A: It is a focus, because it’s so necessary. But have I decided that because I need a political brand that infrastructure is going to be it? No. I believe that it’s a pressing issue right now that needs to be dealt with and is difficult to deal with. I’m not anxious about wading into a difficult conversation with people because I think that that’s what’s expected of leaders right now.

Q: Last night you referenced the revenue discussion for transit infrastructure in the general Toronto area. Is there anything specifically that you’re open to considering at this point? When we talk about revenue, are we talking about road tolls?

A: Metrolinx has put forward some recommendations, but what has to happen now in the next few months is we need to refine that discussion with people. We need to engage the public. It’s not just about transit. It’s about infrastructure in rural and northern municipalities as well and that’s roads and bridges and water systems. The infrastructure discussion is one that has not, in my opinion, had the attention that it needs over the last 30 years, so I’m determined to bring that to the people of Ontario.

Q: What about using revenue tools such as taxes to pay for the deficit and pay down the debt? Are you open to considering that at all?

A: Well, you know, we have a big job as the government of Ontario—we have a lot of services that need to be delivered. We’re on track to eliminate the deficit by 2017-18. We have strategies in place to do that. We’ve overachieved on those targets every year for the last few years, so we’re going to continue on that path.

Q: But even if you eliminate the deficit, you’re still left with that debt. And you’re proudly a progressive—you believe in the power of government to do good things. At what point does that debt limit the government’s ability to do things, and at what point do you have to think about what you’re going to do to get rid of it?

A: Well, you’re absolutely right. We need to get to the point where we’re in a position to be able to pay down the debt. We’re not in that position right now. It’s a huge burden. But we’re not willing to slash services in order to deal with that because I don’t think that that is in the best interests of either the economy or of individuals across the province. So I agree with you, and once we eliminate the deficit I have made a commitment to constrain spending to keep it at one per cent below the growth of the GDP, in order to be able to deal with the debt. But we’ve got to stay on this trajectory first.

Q: Not to belabour the point—you can restrain spending, but at some point do you need to raise taxes?

A: At this point, that’s not the discussion that we’re having. We need to focus on our strengths and address the gaps. And infrastructure is a huge gap.

Q: I don’t know if it’s just because there’s a woman in the premier’s office now, but I read a column recently basically all about your clothes. And before that, there was the issue of the dress code in your office. Are we going through some kind of adjustment period due to having a female premier?

A: You know, the social historians will have to pull all that apart. I remember standing beside Dalton one time, early on when I was a candidate, and I said to him, “You know, men are really lucky in that there’s a uniform. You got a tie and a suit and a shirt and you change ’em up, but there’s a uniform.” And he said to me, “I always thought women were lucky because you get to change it up.” It’s just different. I don’t mind talking about clothes, if that’s what people want to ask me about. It’s not what determines who I am. It’s part of who I am, but it’s not definitional.

Q: With the speech you gave at the convention, with this discussion about clothes, you’ve obviously steered right into personal territory. When you became premier, you were the first woman, the first gay premier—do you mind these sort of labels or do you want to move beyond it?

A: I don’t mind it as long as it doesn’t take away from the other discussion. If that’s all you wanted to talk to me about, then that would be a real concern. But we’ve talked about a whole lot of things this morning. And I respect that conversation. The fact is that human beings bring their whole selves to their jobs. I bring my whole self to this job and if people want to ask me about my whole self, that’s fine, but I’m in the job because I want people to have a job; I want this province to thrive.

Q: Do you feel any extra pressure because of it? Especially being the first gay premier?

A: Well, it’s interesting, I have nothing to compare it with. I’ve only ever been the premier as a lesbian and a woman. I don’t have any way of knowing what it’s like to be a man in this office, but that’s true of my whole life. I know that there are women in every corner of this province, because I’ve talked to them, who are proud to have a woman as a premier. There are men proud to have a woman as a premier. So if my being in this job frees people to think differently about this office, that’s fantastic. And again I’m happy to bring my whole self to these discussions.