Tim Leiweke on the Leafs, Raptors and championship mentality

From the archives: The Maple Leaf Sports and Entertainment CEO in conversation with Jonathon Gatehouse 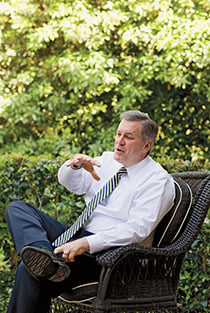 Maple Leaf Sports & Entertainment announced Thursday that it has started looking for a new chief executive officer, with current CEO Tim Leiweke continuing in his role until June 30, 2015 or until a successor is appointed. The following interview with Leiweke was first published on macleans.ca May 3, 2013:

Tim Leiweke has always been known for his sales flair and relentless optimism, qualities that served him well over the last decade as he transformed AEG, the L.A.-based arena, sports and concert conglomerate into a major player in the global entertainment biz. But as the new president and CEO of Maple Leaf Sports and Entertainment (MLSE)—owners of the Leafs, Raptors, TFC and Toronto Marlies—he’ll have his work cut out for him as fans and his bosses (including Rogers, the owner of this magazine) look for someone to finally show them the winning way.

Q: Running MLSE is a big-deal job in Canada, but it doesn’t have anywhere near the scope of your last gig at AEG. Why did you want this position?

A: Well, neither did AEG when we started it, and so I never look at things that are fully baked and get excited about being a part of that. You always want to be a part of something that has great potential. And I am absolutely certain that there’s growth with the Maple Leafs, and it’s called the Stanley Cup. I think all would agree that there are better days ahead for the Raptors and that we have our work cut out, and I like that challenge. I think that TFC is a work in progress and, again, the best days are ahead of it. I happen to believe that there are a lot of opportunities there to grow that brand and to grow the company and, in particular, for the three teams to have much more success.

Q: Is there one of those teams you think should be your priority coming in?

A: My number 1 passion at AEG was always the Kings, so the Maple Leafs are obviously a brand that gets me very excited, but I think they probably are further along than the other two teams. The Raptors are the team that needs the most help: they haven’t been in the playoffs in six years and I think that’s a trend that we have to change. So I’ll probably spend more time on the Raptors to begin with, but from a passion standpoint, I love the National Hockey League. One of the major reasons I took this is the platform that is the Maple Leafs, and I can’t even imagine what’s going to happen when we win that Stanley Cup. And that’s our goal.

Q: I know you haven’t had a chance to really delve into the Raptors yet, but as someone who knows basketball, what do you think the problem is with that organization?

A: Well, I guess I look at it differently, which is: what do I think the opportunity is with that organization? And what I know is there are 36 million-plus potential fans for the Raptors, which gives it the largest single fan base in the NBA. It has the most upside of any team in the NBA, and now we just have to build a vision and a business plan to attack that. And some of that is going to require success on the hardwood, and some of that is going to require us thinking outside the box and rebuilding that brand in the rest of Canada, as well as in Toronto.

Q: You worked closely with Phil Jackson in L.A., and his name is now being bandied about. Is he the type of person who can help you fix the situation?

A: Well, I think it’s nice to throw Phil’s name out there, but he’s newly engaged and his fiancée lives in L.A. He has grandkids now. So I think that although Phil will certainly be—and has been—someone I’ve gone to for advice and input, I don’t think people should expect he is going to be the saviour. We have a current GM, Bryan [Colangelo]. So, first and foremost, I need to go spend time with Bryan before we can define problems, solutions and answers. Phil Jackson knows the city well, by the way—he has a bunch of Canadians in his family, so he’s very partial to Toronto and wants the Raptors to have success. But I don’t want people to think he is going to ride in on a white horse and fix this. It’s not that easy.

Q: MLSE chairman Larry Tanenbaum says one of the problems for all the teams is attracting top-flight free agents; that, in some ways, Toronto is a well-kept secret. What can you do to change that?

A: I never thought I was a top free agent in the business sense, but it seems that the media thought that, and I did have a lot of other opportunities and I turned them all down to come to Toronto. I said “no” to the other offers because I see the future here. Now we have to convey that enthusiasm. MLSE has a new salesman and a new chief spokesman and a new Energizer bunny whose job is to go out and make people understand this is a great city, it’s a great organization. We’re going to put that to work for us and make sure this is a place that, when people think of New York, of L.A., they’re going to think of Toronto, too, as one of the great destinations for players.

Q: You’re well known as the guy who convinced David Beckham to come play soccer in L.A. Is there someone of similar stature you’d like to see playing for Toronto FC?

A: Yes, [TFC president] Kevin Payne and I have talked about it already, and I think we have our work cut out for us. Finding the right guys for Toronto FC will require a little bit of time and energy. What we have to do now is our homework; we have to develop relationships with players who are targets. In the case of David Beckham, it took me two years to convince him to come. And so we have to get after it today in order to have a chance of having someone by next year. Both Kevin and I are committed to getting over to Europe and developing those relationships and finding the right person that we could build that franchise around long-term.

Q: You’ve said you’re most interested in creating a championship mentality. How do you do that?

A: Well, I was blessed to be a part of the Lakers organization, so I learned about a championship mentality and environment from Dr. Jerry Buss and from Jerry West and from Phil Jackson, and I studied that, I consumed that, and we built that into everything else we did at AEG. There was an expectation within our organization to win championships, and that’s what we have to do now with all of the teams in the Maple Leaf Sports family. I think, first and foremost, it’s hard work and being dedicated to doing what it takes to win. It’s all you think about. We are going to absolutely put those trophies front and centre and say, “Now, what do we have to do to win ’em?”

Q: When you were at AEG, you were part of 11 championships. Which one was the most meaningful to you?

A: I loved winning the Stanley Cup with the Kings. It was a lot of hard work, we went through some bad times, we had to be patient. Dean Lombardi—the GM—did a phenomenal job, and he’ll tell you I was on him every day: “What are we going to do to make this team better?” I loved watching the players and their youthful enthusiasm and joy in winning that trophy, and I can only imagine what would happen in Toronto.

Q: What about MLSE’s business side? Where do you see that growing?

A: Well, I think technology is changing our relationship with fans and so, clearly, we’re going to pay a little bit more attention to ticketing and trying to figure that out long-term. They have a great concept in Real Sports, their sports-bar business. I think expanding that is a real opportunity. I think they have some of the best facility-management people in the business and that the management team could help us grow that footprint. So there are other things we could do to expand, to create additional revenue that gives a competitive advantage to these teams that no other team in those leagues is going to have.

Q: You mentioned ticketing. There’s a very real sense in Toronto that when it comes to hockey, the fans are priced out of it. Is there anything you can do about that?

A: Yes. I think sometimes when you come in from outside, you see the world a little bit differently. So I think it’ll help when I come in now and say, “Look, let’s test the boundaries a little bit by doing things others haven’t done, thinking about our business, our fans and our teams in a different way,” and by the way, at least for a little while, I have the support and the ears of the owners.

Q: Is there anything in particular that you’re going to do to try and sound out the fans, or to interact with them?

A: Go sit with them. I bought season tickets with the Kings and sat in the bowl with the fans and heard what they said, good and bad. They’re going to see me, they’re going to hear from me. I will try to understand what they’re thinking about, and they will have access to me. I’ve been in sports my whole life, so I’m not your typical CEO who sits in the tower; I will get involved. And my guess is, I’ll have an even more passionate group of fans than we had in L.A.

Q: There’s already been muttering about an American running an iconic Canadian franchise. Is there anything you’re doing to prepare yourself for life in the Canadian fishbowl?

A: My future son-in-law is a Canadian and I hope I’ll end up being a Canadian, too. I understand I have to prove myself and I’m prepared to do that. At the end of the day, what they’ll see is my citizenship will be a work in progress, but my heart will not be: I am committed to Toronto, to Maple Leaf Sports and these teams, and to that city. I don’t know how to be halfway, and so, first and foremost, my heart has already moved.