In conversation with Robert Kaplan

On how geography threatens the U.S., makes Africa poor and may alter our economy 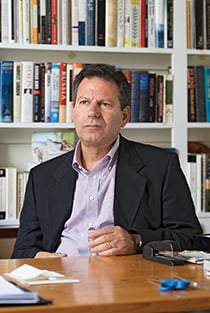 American foreign affairs journalist Robert Kaplan, 60, is the author of 14 books, many about U.S. strategic imperatives and the re-emergence of long-standing cultural tensions hidden by Cold War politics. His new book is The Revenge of Geography: What the Map Tells Us About Coming Conflicts and the Battle Against Fate.

Q: You write that the West, especially the U.S., has lately been ascribing too much influence in geopolitics to human agency, especially air power, and not enough to the literal facts on the ground.

A: That’s a fair summation of the book, but it’s much wider than this. Since the end of the Second World War, with the emergence of economics in a big way, of financial institutions, of political science, of international relations, of human rights organizations, of an intellectual global elite that never existed before, geopolitics has been downplayed and especially geography. There’s this feeling that we’ve overcome geography—the global elite talks in terms of, “We can do this and we can do that”—as though it doesn’t matter. This book is a corrective.

Q: Maps certainly matter in your work. Globes, actually—you also write about the distortions maps give rise to.

A: I like globes because you can learn a lot about the world looking at the north and south polar maps, which lend themselves to a globe. On a globe, places like India and the Middle East and China matter more than you see on conventional Mercator projections, while places in the higher latitudes, like Europe and Greenland, matter less. The most interesting thing about polar maps is that in the north you see an ocean surrounded by land, and a south polar map shows you land surrounded by oceans, so that you realize most of the land and population is in the northern hemisphere, not the southern.

A: Yes, maps encourage generalist thinking, combining various disciplines: economics, geography, politics, ethnic studies, cultural studies. When we talk about things like cultural identity, we need to recall that geography massively influences but doesn’t absolutely determine fate. What we’re really talking about is the experience of a population on a part of the map over many generations.

Q: Geography blessed Europe, you write, with its immense coastline, and burdened Africa.

A: In recent years the economic statistics have been rather good in sub-Saharan Africa—growing at about six per cent—but it’s starting from a very low level. So why has, over history, Africa been so poor? One thing is that although it’s got this vast coastline, it has very few good natural harbours, with the exception of the Indian Ocean area around Kenya and Tanzania, compared to Europe or the east coast of the United States. It has a lot of rivers, but they tend not to be navigable because they drop, so you can’t connect the interior to the coast very well. It’s also very thickly forested in the central portion; that and its flattish terrain do not encourage natural borders, so that wherever you draw the line, the line tends to be artificial and unstable.

Q: So borders still matter, more than we tend to think in our apparently borderless world. In school we used to hear the mantra, “Britain is an island,” to explain its history. Americans might have chanted the same, considering how your country has always ignored its borders. Why doesn’t the Canada-U.S. border matter?

A: The U.S. is a virtual island in many respects. Atlantic to the east, Pacific to the west, and to the north is Canada. But Canada has roughly 30 million people and most of them live within a hundred or so miles of the U.S., so Canada in demographic terms is a kind of middle-class, unthreatening extension of the temperate zone of the United States. The border is long, artificial and not very important.

Q: Not so to your south, where the border is equally artificial?

A: Where geography really threatens the U.S. is at the Mexican border, which may be re-writing U.S. history in a very gradual, organic way, because there is no good natural border between what is now legally Mexico and what is the southwest United States, where there is the biggest discrepancy in income—America has nine times the GDP of Mexico—you can find on any border in the world. Americans have always had the luxury to be an idealistic Wilsonian power because they haven’t had to worry about their own borders, so they could get involved in struggles elsewhere around the world. They see themselves as unthreatened. Well, the Americans who live in parts of Texas, New Mexico and Arizona don’t think that way, but their issues with the Mexican border are not well covered by the elite east coast media. It’s more interested in the European debt crisis, in Iran and Syria and problems with China than it is with the American southwest.

Q: That brings to mind Fernand Braudel’s longue durée—the concept that long-term social structures matter more than periodic historical upheavals—which you discuss in your book. Tim Flannery, the Australian ecologist, once told me that the Europeanized Americas are perhaps just a blip in the long natural history of the two continents, and something more like the human geography of 1491 will return.

A: I find that very interesting and very provocative, because the whole U.S. nation-building myth is based on an east-west orientation. Perhaps America’s greatest one-term president, James K. Polk (1845-49)—he doubled the size of the United States; he deliberately went to war with Mexico to get not just Texas but California, most of New Mexico, most of Arizona, some of Colorado; he got half of the Oregon Territory from Britain, up to the line where the Canadian border is now—fulfilled American’s east-west destiny. But that may not be our destiny in the long run, which may be a north-south organic North American community because of both the dynamism of the Mexican economy and the instability of Mexico at the same time. The border between the U.S. and Mexico cannot hold as it is. There are other factors reorientating North America to a north-south axis, including that, in the future, western Canada may export its natural gas across the ocean to East Asia, whereas eastern Canada will increasingly get its energy from new shale gas discoveries in the northeastern U.S.

Q: You do see that sort of longue durée reasserting itself in the Mediterranean. It was a common coastal civilization for thousands of years, before Islam and Christianity drew a kind of line across the water, separating Europe and Africa. You think that border too may be collapsing.

A: Braudel declared that Europe’s real southern border is the Sahara, not the Mediterranean. Most people in North Africa, from Morocco to Libya, live along the coast. Demographically, North Africa is a Mediterranean coastal phenomenon, and as Morocco and Algeria liberalize, as Tunisia has a new democratic government, as Libya begins the slow recovery from decades of detrimental one-man rule, and as Egypt slowly finds its way out of military emergency law after decades, it’s certainly possible that this region will slowly be reintegrated into the northern Mediterranean too, into Europe.

Q: You were a supporter of the Iraq invasion, which you now think was a mistake, and that’s part of what sparked your interest in geography.

A: I was always interested in geography, but what brought the organizing principle of this book home to me was the fact that while U.S. air power conquered geography in the Balkans in the 1990s, the U.S. was humiliated by geography in Iraq and in Afghanistan. Everyone was a humanitarian interventionist in the 1990s, saying that ethnic tensions could be overcome, and then we saw ethnic sectarian tensions in Iraq undo us, so the debate changed.There was another moment of recognition, when I was embedded with an army unit in 2004. We weren’t even entering into danger, we were just crossing from Kuwait to a base in Iraq and yet it was such a complicated challenge. I never had thought of it in those terms, not just needing trucks and vehicles but food, tents and all. A massive undertaking, dependent on geography.

Q: The invasion of Iraq reflected idealistic thinking. You have a nice line about how realism is only valued after the costs of its absence have been totalled. Will a new realism bring a new isolationism in the U.S.?

A: No, I don’t think so. You’ll notice that when things are going good, realists tend to get bad press. When things are going badly realists suddenly become legitimate. I don’t think the debacle in Iraq will lead to a new isolationism. First of all, there’s always been a quasi-isolationist tendency in the United States because of the virtual island-nation feeling. But remember, isolationists were in full fury early in the 20th century, in the ’30s for instance, when to get to Europe it took you something like five days by ocean liner. We live in a totally different technological age, and isolationism is simply not a serious response. There may be a strain of the American electorate that is emotionally susceptible to isolationists, but the bulk of the electorate, no matter which party wins power, is internationalist.