Q and A with Neil Peart of Rush 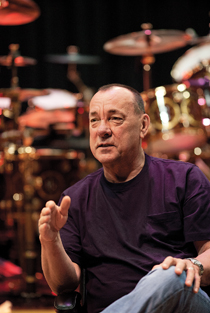 UPDATE: On Dec. 7, 2015, Neil Peart confirmed that he was retiring from music. The interview that follows is from 2012.

Rush’s 20th studio release, Clockwork Angels, hit No. 1 in Canada in June—not bad for a steampunk, progressive rock concept album. Its story, about a young man who flees a land designed to function in perfect mechanical order, reflects the philosophy of drummer and lyricist Neil Peart. Now living in Santa Monica with his wife and daughter, the native of St. Catharines, Ont., is preparing with his long-time bandmates, bassist-singer Geddy Lee and guitarist Alex Lifeson for a concert tour that starts next month. At a Toronto rehearsal studio, he granted a rare interview about musical integrity, freedom and his fight to escape precision.

Q: Thirty-eight years ago you joined Rush, and the next day you went shopping for instruments for your first tour. What are your memories of that time?

A: I remember all of us riding in the truck down to Long & McQuade [a music store in Toronto]. What a young musician’s dream, to say, “Look at those chrome drums. Look at that 22-inch ride cymbal. I’ll have those.” It was one of those unparalleled exciting days of your life.

Q: Did you feel you were embarking on a great, lifelong journey?

A: No, nothing like that. When I was young, my ambitions were very modest. I thought, “If only I could play at the battle of the bands at the Y, that would be the culmination of existence!” And then the roller rink, and you work your way up branch by branch. Whereas if you’re [thinking], “I want to be a rock star”—those kind of people just want to know how they can start at the top, and they’re doomed not even to get to the bottom.

Q: That said, the hero of Clockwork Angels, called Owen Hardy in the novelization [by friend and science fiction writer Kevin J. Anderson, to be published in September], says, “I can’t stop thinking big.”

A: Ah, the classic dreamer, and one of the lovely distinctions that Kevin and I wove over the character with reflection to our own pasts. When I was in the band J.R. Flood in St. Catharines, where we were doing pretty well, I said to my bandmates, “Let’s go to London [England].” I did, on my own, but it surprises me to this day that no one wanted to go with me. I went hungry and wasn’t finding fame and fortune as quickly as I’d fantasized, but there was nothing daunting to me at the time. Like Owen, I did stumble into things, and a trail of events that could not have happened otherwise in one sense led me toward the person I am today. I lived away from home for the first time; I got a real job and proved myself in a workday situation, and thus I was never afraid anymore. As crises came up later on—“Oh, we have to compromise, and the record company wants to do this,” I’d be like, “No, I don’t have to.”

Q: It sounds ideal—having had such a long career without ever needing to compromise.

A: Well, it’s an unending and awful battle, because sometimes you’re up against everybody in the whole world—even your friends and family are saying, “You need a single.” You feel sometimes incredibly alone. When we first got into the professional music business and saw how calculated people were, we called that “the sickness.” We grew up in the ’60s where music was for music’s sake. To us it was pure, and dedicated to getting better, and all of the good ambitions that later became subsumed in the “progressive” moniker.

Q: It seems as though now, with your full-length concept album, Clockwork Angels, you’re swimming against the musical tide.

A: Yeah, but it grew from the bottom up. The reverse is how we worked in the ’70s: I would think of a grand plan and then build the pieces to fit it. This started as a simple [idea]—the steampunk image and aesthetic I liked, I suggested to the guys as the basis for some kind of extended work. It built up to [the album] piece by piece by organic expansion. All the music was created by Geddy and Alex jamming in the studio, and many of the lyrics were just extemporized over email. There’s so much life experience in this story—it’s not just a far-blown fantasy. Wish Them Well [offers] a very mature response to the world that it took me a long time to learn. In a lot of our early stuff, my lyrical inspiration was anger, for sure. [laughs] There’s still a lot I’m angry about, a lot of human behaviour that’s appalling and despicable, but you choose what you can fight against. I always thought if I could just put something in words perfectly enough, people would get the idea and it would change things. That’s a harmless conceit. With people too, you constantly think, “If I’m nice to people and treat them well, they’ll appreciate it and behave better.” They won’t, but it’s still not a bad way to live.

Q: You’ve mentioned being influenced by Voltaire’s Candide and John Barth’s The Sot-Weed Factor—both humorous works. The album’s lyrics, however, are rather dark.

A: They have to be. People don’t realize the limitations of 200 words, and the way they get chiselled down into a song that has to be sung. I love jokes as much as anyone, but I don’t want to hear my snail jokes [he’s collected 16 so far] every day. But I might want to hear a good song every day. We’re just about to film comedy clips like those we used on the last few tours, and of course we necessarily have to ramp them up every time into more ambitious things. To me, the highest expression of life is art with jokes. It’s very rarified, very difficult to accomplish if you want to be more than just funny, and more than just jokes about human gaseousness.

Q: Is there a link between writing about a land that’s meant to function like clockwork and your goal to become a more spontaneous drummer?

A: It’s absolutely coincidental. I have been on that campaign for four or five years. [In the past], my ambition was not a humble one, to try to play with superhuman perfection in the studio and then reproduce that every night. Once I had defined myself as a compositional drummer, I thought, “Well, I want to be an improvisational drummer.” I think in the recorded drum parts on this album, you can sense the excitement and danger: “This guy never played that before, and he just barely made it.” I’m going to cut myself completely loose this tour; I’d always composed and choreographed a tour solo and then improvised within that framework, and this time, I’m throwing that out.

Q: Are you afraid of disrupting generations of air drummers who’ve memorized the classics?

A: The old stuff will remain. A song like Tom Sawyer I don’t need to change. It’s always hard; it’s always satisfying. Why mess with it? And I play some of those songs now so much better than I did then, because I was approximating a style and a feel that now I understand.

Q: Rush received a Governor General’s Performing Arts Award in May. What was it about giving an acceptance speech that made you nervous? After all, you play for several thousand people night after night.

A: I expect if you’re a professional public speaker, you probably wouldn’t want to go onstage and sing and play drums. Standing in front of a microphone where every word or every slip that you make, especially in these times, is with you forever—you want to say the right thing. I fell into having to extemporize, and it came okay because of tools I’ve learned. I said [to myself], “Remember [to mention] mom and dad.”

Q: You have a reputation for being a private person, but in your blog posts and memoirs, you’re quite forthcoming. In some ways you’re the most open member of the band.

A: It is true, but I’m less comfortable in a gregarious social situation, and you can be introverted and still share everything. It just means that you’re guarded. Certainly there is a line that seems perfectly clear to me about what’s to be shared and what isn’t, but it’s not always so clear to others. Extroverts never understand introverts, and it was like that in school days. I read recently that all of us can be defined in adult life by the way others perceived us in high school. I know [people] who had the popular, good-looking path in high school; they tend not to do so well. It was a little bit too easy for them, where for those of us who struggled in every sense, perhaps our determination and self-reliance and discipline were reinforced by that.

Q: Clockwork Angels deals with concepts of fate, circumstance, and free will, which you’ve been writing about throughout your career. What are your thoughts on these issues now?

A: I remain the optimist: you just do your best and hope for the best. But it’s an evolving state of mind. I still totally believe in individual rights and individual responsibility and in choosing to do good. On the liberal side of things, they go to an extreme of how people need to be led, and they can’t handle freedom. Pure libertarianism believes that people will be generous and help each other. Well, they won’t. I wish it were so, and I live that way. I help panhandlers, but other people are, “Oh look at that—why doesn’t he get a job?” While I believe in all that freedom, I also believe that no one should suffer needlessly. A realization I had lately: it is impossible to follow the teachings of Jesus Christ and be a Republican. It’s philosophically absolutely opposed—if they could only think about what they were saying for a minute. That’s when you get caught up in the webs of what people call themselves and how they behave. You just become adaptable and try to lead a good life in ways that make sense, regardless. Because I know at the end of it, if I’m going to meet Jesus or Allah or Buddha, I’m going to be all right.