"Losing soldiers was a shock to everybody’s system"

In conversation with Defence Minister Peter MacKay on Afghanistan, the F-35 controversy and military spending 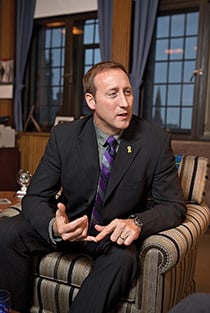 Peter MacKay has been minister of national defence since 2007, and before that served as the first foreign minister in Stephen Harper’s Conservative government. At 47, he’s a political veteran. As the last leader of the old Progressive Conservatives, he bargained with Stephen Harper to unite the right under the new Conservative banner. He has presided over the Canadian army’s historic mission in Afghanistan, but also been widely criticized for his handling of the government’s controversial plan to buy F-35 fighter jets. He spoke to Maclean’s in his Parliament Hill office.

Q: The war in Afghanistan profoundly changed the way many Canadians think about their military. But now that we’re out of combat, and committed to ending our troops’ role training the Afghan National Army in the spring of 2014, what are we likely to have accomplished?

A: I think we’ve given Afghan people hope. And I say that knowing everything stems from security in that country, as it does in most countries. Along with our international allies, along with the Afghans, we’ve built schools, immunized children, promoted women’s inclusivity in their society, in their parliament. So there are many tangible things you can point to. But the sense that young Afghans have that there’s a better future, fragile though it may be, is an enormous accomplishment.

Q: But how can we have any confidence that the Afghan National Army will be able to take over holding the Taliban at bay when Canada and other international forces, especially the U.S., finally withdraw?

A: Well, that is obviously the concern. Two questions remain. When will the Americans leave? And is the [goal of training] 352,000 combined Afghan army and police sufficient? But to me the bigger question is governance. Will the Afghan government be able to adequately fund and support that security force throughout the entire country? One scenario that has to be in the back of your mind is, if they decide to reduce that number by 100,000, do we want well-armed, well-trained young Afghans outside the military with nothing to do?

Q: What lessons do we take from the Afghanistan experience to other situations where a Canadian military contribution might be requested?

A: Be prepared when you go into a country like that. I think going into Afghanistan in 2001 there was a profound lack of understanding of the enormity of the problem. The tribal nature of the country. The history. The determination of the insurgency. From a military standpoint, how to fight an asymmetrical war. We are certainly better equipped now, hardened by the experience, and able to make a more significant contribution to the world.

Q: We contributed fighter jets to the war in Libya and now a big military cargo plane to support the French in Mali. Is our unstated policy to offer air support but never boots on the ground?

Q: Your government tabled its blueprint for re-equipping the military, the Canada First Defence Strategy, back in 2008. Yet only this month, the Tom Jenkins report urged you to start using defence spending more aggressively as an industrial development tool. Do you agree with that approach?

A: That input is going to be extremely important. Do we need modern, affordable equipment? Absolutely. There’s also the important consideration of the Canadian economy. The strength of our economy is also a very important security consideration. So how Canadian industry can benefit has to be weighed into the calculation.

Q: Your record on procurement isn’t very reassuring. Late last year, you launched a new process to look for possible alternatives to the F-35 fighter jets, after years of controversy over that program. Sikorsky is way behind schedule on delivering replacements for our aging Sea King naval helicopters. What’s wrong with the way the government goes about buying military hardware?

A: There were lessons learned in some of these protracted procurements—the Sea King helicopter replacement project goes back to 1986, F-35 Joint Strike Fighter started in 1997. One has to look at the market and never lose sight of the operational requirements of the military.

Q: Just to focus on those helicopters for a moment: the government signed a $5-billion deal with Sikorsky in 2004 for 28 Cylcones, with the first delivery planned for 2009. We’re still waiting. Can’t anything be done?

A: You can find much of the problem in this particular procurement within the company itself. They’ve had work stoppages, complications. There are contractual obligations that we are going to hold them to. We have already called them on some of the delays to invoke penalties. And the clock is running. There have been endless meetings to put pressure on them. When things fall apart on some of these contracts, you’re into a lawsuit and the lawyers win.

Q: More broadly, given the F-35 controversy in particular, do you think your government is doing enough to fix the way it approaches these multi-billion-dollar procurements?

A: Yes I do. [Public Works] Minister Rona Ambrose is leading that process, with the advice of the Jenkins report and input from all of the departments, and including the chief of defence staff. We are going to bring about a better way to do these procurements. Having everybody in the room, just so there isn’t a crack of daylight between what the departments are attempting to do on these major procurements seems like common sense, but it wasn’t always happening. So I’m hopeful.

Q: Sen. Doug Finley, such a key architect of the strategy that brought your party to power, has said that a pillar of the Conservative brand is patriotism linked to staunch support for the military. But last year’s budget imposed a cut of more than five per cent to your department, and more of the same seems likely. Will it be possible to maintain that part of the Tory formula in an era of prolonged spending restraint?

A: I would put it this way: we’ve put a lot in the bag. The defence budget was just over $14 billion when we took office; it’s now about $20 billion. And that’s without getting into major procurement contracts and singular investments in things like infrastructure. That was partly to grow the size of the force. Regular and reserve numbers are up. In order to have a robust modern military we must continue to have these investments. We will see growth, albeit slower growth. That is going to require a more measured approach to where these investments are made.

Q: Where will you find the savings Finance Minister Jim Flaherty is demanding?

A: Some of the savings that we will submit will be found through efficiencies. Some infrastructure is no longer necessary. You know, National Defence is the largest property holder in the government of Canada.

Q: You had this job during some emotionally charged years when Canadians were fighting in Afghanistan. Coping with the deaths of soldiers must have been hard, but there was also an upswing in public interest and pride in our troops. Is it less interesting these days with budget issues and procurement woes dominating your job?

A: You know, there was certainly an awakening during those high-tempo years in Afghanistan. Losing soldiers was a shock to everybody’s system. I stood on that tarmac 86, 87 times with the Governor General, Gen. Walter Natynczyk and the families. That’s soul-destroying. But it’s also a very stark reminder of what’s at stake. I drew motivation from that to see what we can do to be sure we maximize their opportunity for mission success and their chance to come home safe.

Q: So is that the tone you take into a meeting with Flaherty when he’s asking you to spend less?

A: Absolutely. And I had Minister Flaherty come to Afghanistan for that very reason. Minister Ambrose has been there. I wanted them to see first-hand and know what equipment means, from flak jackets to fighter jets, and everything in between.