John McAfee's endgame: 'To stay alive as long as possible'

The software tycoon in conversation with Martin Patriquin 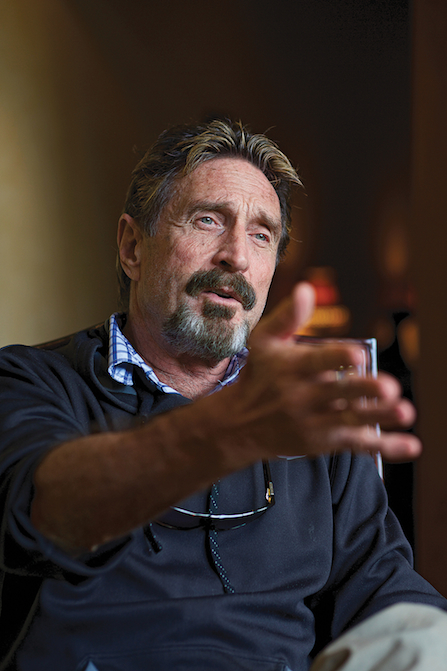 He fled the Central American country of Belize to Portland, Ore., by way of Guatemala and Miami in the wake of his neighbour’s murder, with his 20-year-old girlfriend and a film crew in tow. Yet little is what it seems with John McAfee, 67, the Virginia-raised software developer, who sold his eponymous anti-virus company in the mid-’90s to pursue a life of sun, sex and adrenalin. His life changed—though not necessarily for the worse—when he became a person of interest following the November 2012 killing of American Gregory Faull in Belize. McAfee claims the government wanted to frame him for the murder, and that he orchestrated his own media feeding frenzy to prevent his detainment. His escape from the country was certainly cable news fodder, and will be part of a series of movie and book-related projects by Montreal-based Impact Future Media.

Q: So, Belize to Guatemala to Miami to Portland to a five-star hotel in Mont Tremblant, Que. Please explain.

A: Well, it’s one step after another. It’s like in The Lion in Winter. After the most ferocious fight ever put on screen, Peter O’Toole says, “How, from where we started, did it ever get to this?” And she says, “Step by step.” From Belize, I escaped into Guatemala in the company of two journalists from Vice [magazine] and [then-girlfriend] Samantha Vanegas. We crossed the border by boat, spent the night in a hotel where I’d stayed many times but because I’d always been in disguise no one noticed me. We attempted to get our passports stamped, and the guy said, “Excuse me, I must go get my supervisor.” We knew we’d get sent back. I asked if we could go and eat. Instead of getting food, we went straight to the boats. We hired a skiff and went to the town of Fronteras. Unfortunately, the Vice journalists took a photograph and someone along the way neglected to remove the location data. Within five minutes there were Google images of the hotel we were staying at. Samantha packed our bags, and we left. We found the first taxi. I bought the taxi driver’s cellphone for $500. I opened it, threw the battery out the window. We found a little pub, thanked the cab driver for his time. I said we have an hour now. Let’s eat.

Q: You were arrested there in Guatemala not long after and eventually deported to Miami, after you faked a heart attack to buy time for your lawyer, who fought to keep you from getting sent back to Belize. How does one fake a heart attack?

A: I dropped on the ground. I was actually in a fair bit of pain, and twitched a bit. The doctor kept me from being seized by the army.

Q: Do you think the Vice guys sent that picture by accident, or was it on purpose?

A: I am loath to think they did this on purpose, simply because we had become fast friends, I thought. I began to trust them. They were journalists, of course, but nevertheless human beings. Even for a journalist, this would have been way too low.

A: I don’t like that word, “despise.” I see the media for what it is. It’s an occupation that forces an attitude and a way of acting that makes you not a lot of fun to play with. You’re slippery, tricky, deceitful.

Q: And yet you need us. What would have happened if the media hadn’t been around for you?

A: I probably wouldn’t have survived. The government of Belize would have had free rein.

Q: You hit this kind of media zeitgeist right around the time when you became a person of interest in the murder of Gregory Faull. You are a teetotaler, as you’ve said a number of times, yet you put it out that you’d tried “bath salts,” the recreational drug, and that it was the best high you’ve ever had. The immediate theory that came out was that you got “zombie high” and went off to shoot someone.

A: First of all, it is indeed a zombie high, I hear. It’s unpleasant to the user, and creates such a level of disturbance that a user had eaten the face off of a stranger in Florida a month or so earlier. It’s not something I would chase after. And yet, it was topical, and anything touching on bath salts was being talked about everywhere. I thought it was a seriously good topic. It’s all planned, of course.

Q: Up to the murder of Gregory Faull.

A: That was the night of Gregory Faull’s murder?

A: I was in bed, enjoying myself.

Q: Your life was strange even before the raid on your compound and the incident involving Mr. Faull. You had adoration, you had an outlet for your words, you could be as eccentric as you wanted to be. It’s a bit like watching Charlie Sheen, except someone who is smart enough not to do a sitcom but instead live that sitcom in real life.

A: That’s absolutely true. The one difference with Charlie Sheen is during his time he was doing more drugs than I could carry, which I was not. He was doing it in a sitcom, which allows that. I was doing it in real life, which doesn’t allow a cloudy head. Even with a clear head I barely squeaked by. I couldn’t have organized the enormous press attention to my cause, which meant picking the people who would spin things in the most interesting light. Unfortunately, that interesting light was one that wasn’t flattering to me. I sacrificed self-image for freedom and life.

Q: The crazy aspect, you mean.

A:Yes. I go with that. Nothing’s better than a crazy man on the loose, especially if he is high-profile, wealthy and is involved in sex, drugs and murder. What is a better story, sir?

A: But he didn’t play his properly. And I’m one of those people who thinks O.J. is innocent. I mean, the man’s not insane enough . . . I just believe he was innocent.

Q: Your wife-to-be, Janice Dyson, is writing a tell-all book about you. Normally people wait to get divorced before that happens.

A: We had a falling out over issues that are no one’s business but our own. And we were separated for a brief amount of time. The situation being what it is, it was snapped up immediately. When you’re mad at somebody, when you think you’ve been wronged, you do things you later regret. There are worse things she could have done. Amy, my [former] girlfriend, tried to shoot me.

A: Right. I was asleep. She put the gun to the side of my head. She closes her eyes and pulls the trigger. I don’t know if you’ve ever fired a .357 Magnum, but the trigger pull is huge, so the barrel moved away from my head as she pulled it, just enough so that my brains weren’t blown out but the impact from the sound burst my eardrum. I don’t hear much out of it now.

Q: You built Amy a house after she tried to kill you. How is she doing?

A: She’s doing fine. She lives with an American musician named Keith, and she is quite content. We keep in constant communication. I like her very much still as a human being. She is most entertaining. She’s writing a book about me, too. I have no idea what that’s going to be.

Q: You’ve made this spoof video in which you make fun of McAfee anti-virus software, which you have nothing to do with anymore. Everything’s in there: the paranoia, the bath salts, the young women and guns, and you turned it into a farce. To what end?

A: I think that making fun of yourself does two things. It reminds you that you aren’t as serious a person as you might think you are, and it puts your opponents ill at ease.

Q: At one point you shoot a gun at the screen. I wonder how that might be interpreted, given that you are a person of interest in Gregory Faull’s murder.

Q: When McAfee software first came out, you fomented paranoia with this new technology by suggesting to people that their computer might have some sort of disease. How necessary was McAfee software back then?

A: It wasn’t of paramount importance, but I knew one day it would be, and if you had the software it wasn’t going to hurt you any. I did use paranoia. I encouraged it. I admit that.

Q: What is the endgame for John McAfee?

A: To stay alive as long as possible. For the near term [it] is to successfully put out the biography, the documentary, the feature-length film, the cartoon novel. When that is finished, I’m going to sit back and plan my next move. It might include returning to Belize, who knows.