In conversation with Jonathon Gatehouse 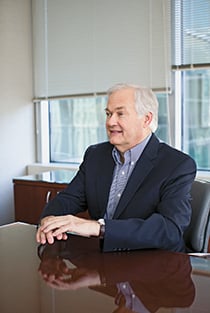 For hockey fans, there’s something depressingly familiar about the current battle between the National Hockey League and its players. The lockout, which began at the stroke of midnight on Sept. 15, is the third in the past 18 years, all of them overseen by commissioner Gary Bettman. And the issue is the same as it ever was: money. In fact, the only significant difference this time around might be who is leading the players. Donald Fehr, the new executive director of the NHL Players’ Association, led pro baseball’s union for a quarter of a century, before riding to the rescue of his defeated and demoralized hockey brethren. Tough and determined, he’s every bit as stubborn as the man he’s facing across the table.

Q: In the run-up to the lockout, there have been proposals, counter-proposals, and a lot of numbers thrown around. Just how far apart are the league and the players?

A: It comes down to this. The players made enormous concessions in the last lockout, and took a 25 per cent salary reduction, which worked out to more than $3 billion over the life of the agreement. And the league has experienced seven straight years of record revenue growth. So then we came into bargaining, and the owners’ initial proposal called for another 24 per cent reduction, or $450 million a year, assuming revenues never grow. It was way over the top, and way outside the bounds. The equivalent from the players would have been for us to say we want 71 per cent of all hockey-related revenues (HRR). So now the owners have said they only want a reduction of 17.5 per cent, and that they’ll phase it in a little bit, but it’s still well over $300 million a year. So we’re hundreds of millions of dollars apart on compensation.

Q: At this point, is there anything the two sides agree on?

A: The two sides finally agree on an accounting system. Originally, they had proposed to change all the definitions of HRR, but they now agree it makes little sense to throw out a system everybody understands and is comfortable with. We’ve had some good discussions on ancillary, non-economic issues. And we have indicated that we’re willing to move in their direction by limiting the future growth of salaries. But we want the owners to do their part too, and grow the game.

Q: Despite the NHL’s record revenues, Gary Bettman says it’s a money-losing business. Do you give any credence to that?

A: I can’t comment precisely because although we have a lot of financial information from the teams, we’ve also signed non-disclosure agreements. But you haven’t seen an explanation from the owners saying we have to have this because this particular team needs this additional amount of money. In fact, all of their proposals would provide similar cost savings whether you were Toronto or the New York Rangers or the Phoenix Coyotes. And to us that says this is simply about trying to reduce costs for everyone, rather than trying to solve problems with particular franchises. One of the difficulties we’re having right now is trying to figure out exactly what the effect of the owners’ proposals would be. We’ve asked for examples of how they would change the balance sheets of each of the teams. So far, we haven’t had an answer to that—whether that’s because they don’t know, or because they don’t think it will help their position, I can’t say. But it makes it difficult to do financial negotiations.

Q: This makes it three contract negotiations in a row where the players have been locked out. You’ve said that hockey needs to get beyond this adversarial cycle. But how?

A: On a philosophical basis, we need to come to an agreement that equitably distributes the benefits and the risks, and allows everyone to go forward together and build this game into something much bigger. And if we have trouble spots, we have to fix them, rather than pretend all the teams are exactly the same, and should be treated exactly the same way.

Q: Is there anything about hockey’s economics that makes it different from other pro sports?

A: The one place I think hockey is different is that it’s far better positioned to develop the game on the international level and become the first transcontinental sport, with an audience in North America and Europe. And I think that we’ve got to find a way to take advantage of that.

Q: The labour agreements that the NFL and NBA signed after their lockouts last year resulted in 50/50 revenue splits. Your guys have already indicated a willingness to reduce their share from the current 57 per cent. Is that an admission that they’re getting too much of the pie?

A: If you ask the players what they deserve, they’ll tell you they’d be happy with a free market where the clubs pay what they want—as long as they don’t conspire about it. The very nature of a cap means that the players are underpaid with regards to what their free-market value is. That’s the whole point.

Q: Gary Bettman has said one of the reasons the NHL has locked you out is that the players were slow coming to the table. Why did it take so long to get the formal talks under way?

A: That’s not a fair criticism. We told them that we were ready to talk immediately after they served us notice that they were terminating the collective bargaining agreement in May, and it took them a month to get organized. And secondly, if at any time over the winter they had wanted to say, “Here’s the situation, here are our numbers, here are our proposals,” they could have done that. They didn’t.

Q: At the end of the day, this is a labour battle that pits millionaires against billionaires. Is there any reason for the public to feel sympathy for either side?

A: We know there’s a great public interest in this. And all we can do for the fans who buy the tickets and watch on TV is to tell them the truth as clearly and succinctly as we can. And we’ve been doing that, and we’ll continue to do that. But millionaires and billionaires are not the same thing. People can imagine becoming a millionaire. But even if you put aside a million dollars a year, it would take you 1,000 years to become a billionaire. So they are not even remotely comparable. The only thing they have in common is that they both end in the letters a-i-r-e-s.

Q: The NHLPA brought actions before the provincial labour relations boards in Quebec and Alberta seeking local injunctions against the lockout. Were you hoping for a decision that would keep those teams playing, or simply getting paid?

A: Under Canadian law there are certain things an employer has to do before they can lock out their employees. And we didn’t think the NHL had satisfied those preconditions. Our interest was in not having a lockout and continuing to negotiate. But the owners couldn’t get there fast enough.

Q: You’ve been through this type of situation many times in your career. At this point, are you optimistic or pessimistic?

Q: What has the tone of the discussions been like so far?

A: For the most part, professional. They’ve been blunt. Sometimes with a little bit of a light mood, but usually they’ve been a lot heavier. From the players’ perspective, it’s hard for it to be light because this is a lockout of choice, not necessity. There’s no law or reason for the owners to lock us out of training camp. They’re doing it because they perceive it as some sort of advantage. And it’s part of the playbook. It’s exactly what happened in basketball, football and the last time around in hockey.

Q: Just before the lockout began, you had a meeting in New York that drew almost 300 players. What message were you trying to send to the owners and the fans?

A: We believe in complete openness. Any player that wants to come to a negotiating session can do so and ask Gary Bettman or the owners a question, and form and express their own opinion. The owners don’t do that. They drastically limit who can come to meetings. So what it tells me when we have almost half our membership show up is that the players are involved and interested and they want to participate. I take it as an extraordinarily good sign about the unity and cohesion of the players, and their willingness to do whatever has to be done to get an appropriate agreement.

Q: A lot of fans are very angry, and very worried that they won’t see hockey before the end of 2012, or perhaps even lose another season. What’s your message to these people?

A: First of all, I hope they’re wrong. The players are going to do whatever they can to get a fair agreement and get it done as soon as they can. But what you have to remember is that it takes two to make a deal. And there’s only been one side talking about shutdowns, losing large parts of the season, saying, “Give me what I want right now.” And that’s the same side that has done it twice before. And I would just ask the fans to remember that.