One of these things is much like the other 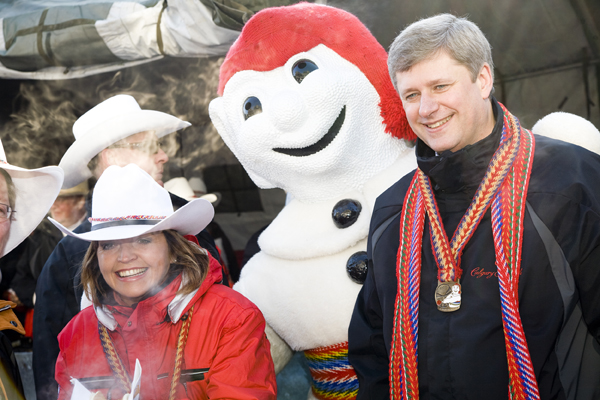 Our Prime Minister is a cheeky fellow, isn’t he? Old firewall himself has suddenly become more Québécois than the freakin’ Bonhomme Carnivale Carnaval [Thanks Ti-Guy]. He hugged babies in la belle province on St Jean Baptiste – though admittedly in the Anglo enclave of Greenfield Park; next year, he should try it here or even here – and declared himself a “true nationalist”.

“True nationalists don’t want to destroy, they want to build. We (the Conservatives) are the true nationalists,” he said, before he apparently gorged himself on foie gras and had the fleur-de-lys tattooed on the fleshy part of his left thigh.

But anyway. Check the current Conservative slogan for candidate Guy Dufort, who is running in the Westmount-Ville-Marie by-election:

Now consider that of the Parti Québécois circa 1981:

Faut rester forts au Québec – We must remain strong in Quebec. (English translation mine; for some reason, I couldn’t find an English version on the PQ’s website.)

A little uncanny, yes? And to think that all this nationalist pandering is coming from a guy who once opposed the Calgary Declaration, a post-Meech acknowledgement of Quebec’s unique status, because… it pandered to Quebec nationalists. “It’s extremely unwise for a federalist party to say it wants to attract separatists or sovereigntists whether they’re called hard or soft,” Harper said in 1998, while president of the National Citizens’ Coalition.