OTTAWA — Fire officials in Ottawa say a driver suffered minor injuries after a car went into a sinkhole on Tuesday afternoon. 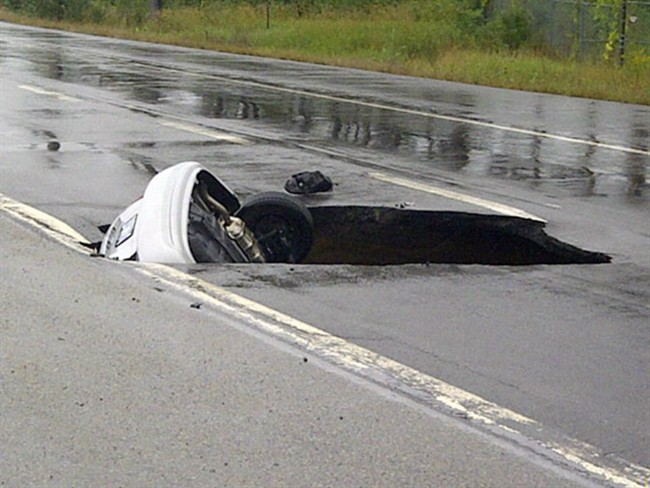 A car is seen after falling into a hole on the Highway 174 off-ramp at Jeanne D'arc Boulevard. Fire officials in Ottawa say a driver suffered minor injuries. (THE CANADIAN PRESS/HO - Ottawa Fire Department)

OTTAWA – A 48-year-old man suffered only minor injuries after his car went into a sinkhole on an Ottawa road as he drove home from work on Tuesday afternoon.

J.P. Unger said he’s relieved to be alive after his car fell into the sinkhole on the Highway 174 off-ramp at Jeanne D’Arc Boulevard.

Unger said he noticed what he thought was a black patch or tarp on the road.

“Five metres before I reached it, I realized, ‘Holy smokes! It’s a complete hole in the road,'” Unger said.

“By then, I couldn’t swerve or come to a full stop,” he said.

Fire spokesman Marc Messier said that except for the rear bumper, the entire car was below the surface of the road when emergency crews arrived at the scene.

Unger was the only occupant of the car and Messier said he was able to get out of the vehicle on his own before being helped out of the hole by some witnesses.

Unger was treated by paramedics for minor injuries and released.

He has a gash on his leg and scratches on his abdomen, but said he can’t believe that he managed to walk away from what could have been a far worse situation.