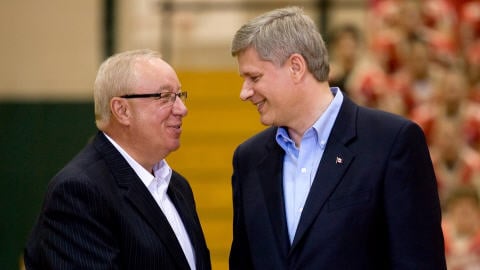 Last night, whilst watching the bit about the new senate appointees, the cynicism folded onto itself like ham and American cheese in a Denny’s sandwich, compacting itself into a messy little knot in my sternum where it resided, Denny’s sandwich-like, until I finally managed to hork it onto the page.

No, the real pisser is this: Jacques Demers. Flubby, lovable and illiterate Jacques Demers. A funny thing happened the moment Harper appointed the erstwhile Habs coach and quasi-deity to the red chamber. We heard, at the top of every newscast, the soft-lens story of Demers himself, the former truck driver turned hockey coach who spent much of his life hiding the fact that he couldn’t read. Radio-Canada reported that a Montreal illiteracy help line saw a 300 percent increase in the number of calls in the space of an afternoon. Missing, or at least considerably dulled, was the chatter about the above-mentioned hypocrisy. Also largely MIA: the fact that Quebecers are, along with Albertans, traditionally the most ardent voices for Senate reform in the country–a sentiment for which Harper himself was associated back in his Reform days, and which he was quick to harness when courting Quebec’s favour during the last two elections.