A monkey is dead and one man has been arrested after a weekend incident Zoo Boise in Idaho. 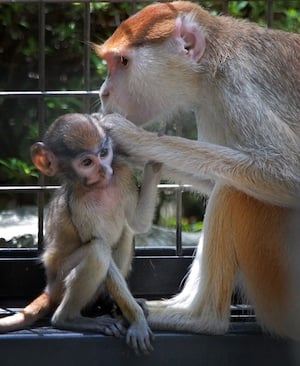 A Patas monkey, similar to the one that was killed in an Idaho zoo, grooms her two-month-old baby monkey at the Chiba Zoological Park on May 8, 2011. (Itsuo Inouye/AP)

Michael J. Watkins, 22, was charged with burglary and grand theft on Monday, reports the Idaho Press-Tribune.

The arrest comes after a weekend incident where police say they received a call from a zoo security guard around 4:30 a.m. on Saturday morning. Two men were on zoo property and ran when they were approached by the guard, police said.

When police arrived they found the little Patas monkey outside of its enclosure.

At the time, police said the monkey suffered a “blunt force head injury” and it died shortly after it was found.

“They found the animal near the primate exhibit. The animal was seriously injured,” Boise Police Department Chief Michael Masterson told reporters at a press conference Monday after the arrest was made.

Calling the monkey’s death a “senseless crime,” Masterson said a citizen tip and information from a hospital where one of the suspects went for treatment helped officers make the arrest.