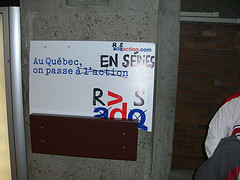 That Léger Marketing poll (PDF) I briefly mentioned in an earlier post might shed some light on Martin’s post about the ADQ’s, um, sophisticated approach to immigration issues. The Léger folks happened to have asked a couple questions about immigration. Let’s just say Mario Dumont and the troops seem to like their grandparents’ Quebec a lot more than they do the contemporary one:

Some other interesting numbers from Léger: