PQ: English CEGEP and French students not to be mixed 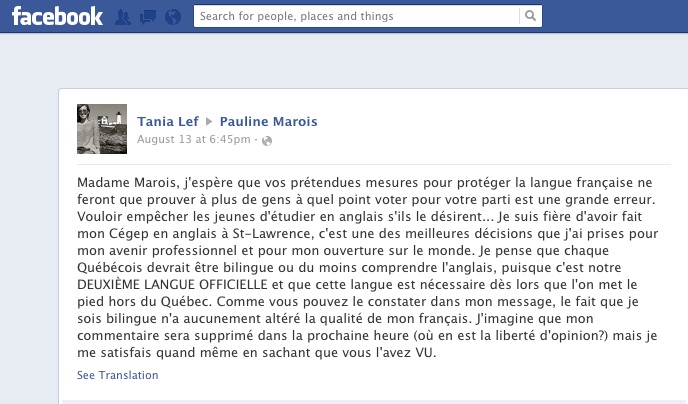 Tania Lefrançois is a 24-year-old MBA student at Université Laval (thx @stephenfgordon). She recently posted a cri de coeur on Pauline Marois’s Facebook page, criticizing the Parti Québécois plan to prevent Francophone and immigrant students from attending CEGEP (Quebec’s system of post-secondary, pre-univeristy schools) in English. The PQ policy to apply Bill 101 to CEGEPs is important because, as Marois said yesterday on the campaign trail, “The Quebec state doesn’t want to pay for the anglicization of its people.”

I contacted Tania after last week. “I can’t believe I had to write it,” she says. “English is a necessity. You need it. After I posted it I got notes form people who said they needed English for work but couldn’t speak it.”

“I live completely in French. Going to English CEGEP didn’t change my life at all. It only opened more doors for me.”

Here’s a translation of Lefrançois’s note, which is still on Marois’s Facebook page. So’s this one.

Ms. Marois, I hope that your so-called measures to protect the French language won’t simply prove to people to what point voting for your party is a big mistake. Wanted to prevent young people from studying in English if they so desire… I an proud to have gone to school in English at St-Lawrence CEGEP, and it is one of the best decisions I ever made for my professional future and for as a gateway to the world. I think that every Quebecer should be bilingual or at least understand English, as it is our SECOND OFFICIAL LANGUAGE and it is necessary the second we step foot out of Quebec.