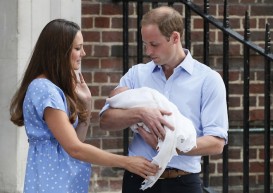 The Duke of Cambridge is preparing to leave his quiet home in Anglesey, Wales for the noisy life of raising a newborn. Prince William’s three-year post as a Royal Air Force search-and-rescue helicopter pilot will be ending next month and many expect him to return to his wife and baby boy in England.

“I have to say that I thought search and rescue duties over Snowdonia were physically and mentally demanding, but looking after a three-week-old baby is up there!” William told the people of Anglesey on Wednesday.

To the delight of the crowd, William tried out his Welsh dialect for part of the speech, then chatted afterward with residents, including some who he rescued while on the job. The duchess of Cambridge and Prince George were not in attendance for William’s second public appearance since he became a father.

More details on the duke’s future in the military will be announced in the next few weeks. He could be posted somewhere else in Britain. Some British media, however, discussed the possibility of him leaving the RAF together to prepare for the role as King.