Q & A: Will Ferguson

The Canadian author took an arduous journey across Northern Ireland, falling asleep in pubs and making sense of Protestants and Catholics 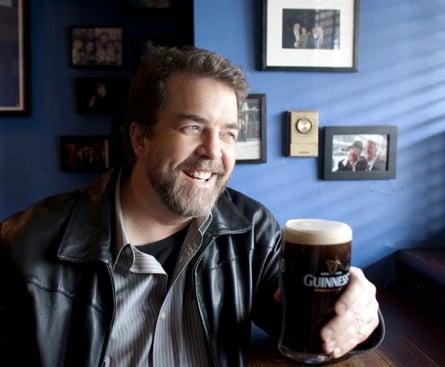 The Ulster Way is advertised by tourism officials in Northern Ireland as “the longest waymarked trail in the British Isles.” But as Will Ferguson discovered when he attempted to walk all 900 km of it, “waymarked” and “trail” can be relative terms. Ferguson’s new book, Beyond Belfast, is a thoughtful travelogue chronicling his arduous journey across Northern Ireland (or Ulster) in a bid to uncover his grandfather’s long-buried Northern Irish roots. The Calgary-based author recently sat down with Macleans.ca at an Irish pub in Toronto to discuss his trek, the religious violence that has pockmarked Ulster’s history and its people, and why it’s easier to make fun of Canadians than anyone else.

A: Which I didn’t expect. For days on end, I’d be up in the hills. Because it’s Ireland, I thought it was going to be hill-valley-pub, hill-valley-pub, but it wasn’t. It was hill-bog-bog-bog-valley-pub. I was a cheap drunk, though. I’d have a pint and it would just hit me.

Q: You mention falling asleep at a table.

A: It happened more than once. They’d think I was some drunk, some lush.

Q: For a good portion of the book, the politics of Northern Ireland take a backseat to the landscape—especially in the Glens.

A: That’s a very peaceful area, even at the height of the Troubles. The choice was to go south or north from Belfast and I wanted to start, not easy, but you know, coast-walking. The Glens were quite steep, but coast-walking is almost like strolling.

Q: It seems like it gave you time to soak in the mythology of Ireland—the banshees, the mist, the ghosts.

A: I don’t believe in banshees, but I got scared. There’s something that happens in the bog. The wind whistles low along the ground and I’m sure that’s where the myths come from. You hear these moans. You hear it all the time and it starts to get in your brain. You’re hiking and the mist comes in, and you’re like, “Oh, God.”

Q: There’s a recurring tension throughout the book whenever you get into the cities and are trying to sort out people’s political affiliations.

A: The scariest was in Portadown. There were Union Jacks flying all down the street. And it’s a street that’s maybe the width of these two booths—barely a street. So there’s a little stream and a little bridge, and on the other side there’s tri-colours [Irish flags] and IRA signs. I remember thinking, “Oh, shit. This can’t be good.” And this is Portadown, which is a really violent city anyway. An old pensioner came and said, “You shouldn’t be down here.”

Q: Was it sometimes a challenge to figure out whose turf you were on?

A: It was easier than I thought. They let you know. They want you to know. If there are fewer flags, it’s usually Catholic. It’s the Protestants who go whole-hog with Union Jacks everywhere. They say the River Bann divides it, but it doesn’t really. It’s like saying the Quebec border is the division between French and English Canada.

Q: But if you go to Ottawa, you know that’s not true.

A: Or if you go to the West Island of Montreal, or the Eastern Townships. That’s what the River Bann is like—it’s kind of the border.

Q: Was there an element of bravado in choosing Ulster? Were you looking for trouble?

A: No, I was very worried. The bravado was that I was just going to be able to stride across the landscape. I had all this gear. I thought it was going to go oh-so-smoothly. By the end, I was dragging my packs into pubs, covered in rain, and muttering to myself. But I never really felt in danger because I knew instinctively that they really don’t care if you’re Catholic or Protestant—they care if their neighbour is Catholic or Protestant. They almost go to the other extreme to prove that they’re tolerant. If I was in a Catholic B & B in a Catholic town and they of course realized I was Protestant, instead of shunning me, it was the opposite.

A: Well, the name, the surname. And they would ask questions, they would fish. I’d always assumed Ferguson is a Protestant name, but there are areas in Fermanagh and Countydown where there is a small Catholic community. And if you look at the deaths in the Troubles, there are Protestant Fergusons who got killed and Catholic Fergusons who got killed. If I know my family, they killed each other. [Laughs]

Q: You seem to have gotten exasperated rather quickly with the sectarian politics.

A: I didn’t want to romanticize it. Whenever somebody romanticizes the IRA, I say go to Enniskillen, where they blew up pensioners. Or when Protestants tell me about their battles—look at the Shankhill Butchers. The two things that stand out to me, looking back, is how kind the people were in an understated way and how beautiful the landscape was. Why they can’t show that same kindness to each other is something I don’t understand.

Q: At the same time, there’s a real sadness that comes through in parts of the book. For instance, you write that, “the alienation of Irish Protestants from Gaelic culture is one of the most unfortunate aspects of the current approach to Irish identity.”

A: The sad thing is that it’s seeped into Protestant thinking that “we’re just visiting,” that “we’re born into exile.” They’ve been there longer than the French have been in Quebec. I don’t think anybody in Quebec says, “We’re not really from here, we’re really from Europe.” And you don’t hear English Canadians saying “England is our home, not this place.”

Q: You make the claim that the Protestants are staking a claim to the past, but leaving the future to the Catholics.

A: That’s exactly what happens. I find the Republican stance completely delusional. I think it’s delusion to think that if you keep bombing someone enough, they’ll become Irish. But it’s optimistic. It’s all about the future glory. The Protestants are all about holding the line and that’s exhausting.

Q: You’ve mentioned the Quebec-Canada relationship a lot. Do you get a sense there’s a parallel there?

A: Roughly, yes. The Québécois are more rational, they’re more reasonable. Imagine if the FLQ was still bombing things for 30 years. The rough parallel is that the FLQ is like the IRA and Sinn Fein is like the Parti Québécois. Bloody Sunday and the October Crisis were roughly around the same time—when the late sixties civil rights movement turned into this 1970s violence. But it never caught fire in Quebec. I think it’s the nature of the culture.

A: My gut feeling is their visit doesn’t resonate because the institution of monarchy is really hollow. It’s just a pair of tourists who are here on a junket.

Q: You seem to take Irish/Ulster nationalism a lot more seriously than you take Canadian nationalism, which you’ve lampooned.

A: Well, our nationalism doesn’t blow stuff up.

Q: Did you feel like you had a bit more license when you were lampooning Canadians?

A: Oh God, yes. And Canadians understand that. I would never title a book “Why I Hate Protestants in Ulster.” I would be killed. Canada is one of the only countries where you can write a book titled Why I Hate Canadians and people assume it’s a joke. Civic nationalism in Canada can be more inclusive and it can also be very, very silly, because inclusiveness can rapidly become funny. We were talking the other day about people getting offended on someone else’s behalf. That’s very much a Canadian thing. And, to be honest, Beyond Belfast is a travel book, it’s not a political polemic. I don’t think I’d be comfortable making fun unless I lived there. There are books by the Northern Irish that are very hard on the Northern Irish. They’re very capable of self-critique.

Q: Now that you’ve solved the mystery of your grandfather’s roots, is it over for you? Is that chapter closed?

A: My main thing was to do justice and to introduce him as a person, as a real person, not just as a symbol of something. I always tell people I don’t want to spoil the ending, but the fact we’re sitting here today having an interview and I’m not at my castle drinking Champagne is a clue. If I had found my castle, the book would’ve just stopped. You would’ve turned the page and it would’ve been blank.