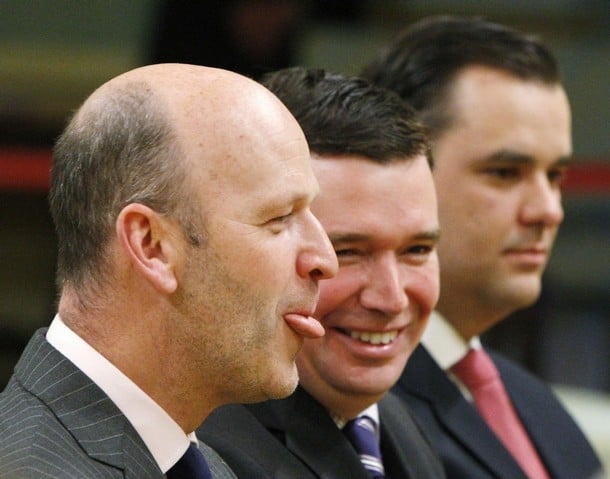 Were he still alive and wailing, Mordecai Richler might have used the term chutzpah, among a few other choice words, to describe boy champion Michael Fortier. On Christiane Charette‘s radio show not too long ago, the lawyer-cum-unelected-cabinet-minister, whose purposefully unshaven mug currently adorns campaign signs in the riding of Vaudreuil-Soulanges for the first time, said Stephen Harper had done Montreal a favour by appointing a cabinet minister from an area that hadn’t elected a single Conservative rear end to plunk into his cabinet. “He didn’t have to do it,” Fortier said. The inference shocked both the (admittedly very shockable) Charette and her listening public: Harper, sympathetic soul that he is, deigned Montreal worthy enough for cabinet representation, even though the citizens of the city, all those artists and communists and subsidy-loving séparatistes, didn’t have the courtesy of electing one of his own candidates. Stupid, ungrateful second biggest city in the country!

Yesterday, Fortier took another swipe at subtlety and good taste by parking a billboard truck in front of Gilles Duceppe’s election office, announcing the futility and general uselessness of Mr. Duceppe’s Bloc Québécois. If the ad copy–“With the Bloc, we only get the bill: 18 years in Ottawa + zero results = $350 million”–wasn’t quite obvious enough, Fortier reiterated the notion that a vote for the Bloc would mean less love from Canada’s New Government™. “The more Bloc MPs [In Ottawa], the more the bill will go up and the more the return will be zero,” he told La Presse.

Now, far be it from me to question the legitimacy of an unelected politician who questions the legitimacy of a democratically elected party by way of a rolling, diesel-chugging advertisement. Surely, the voice of Montreal in Stephen Harper’s cabinet is running for election in an off-island district because he likes the scenery, not because he knows he hasn’t a snowball’s chance in Hades anywhere in the 514. And I’ll assume that Fortier isn’t so silly as to insult the intelligence of those Montrealers who have time and again voted en masse for the Bloc Québécois, electing five area MPs in the last election–thanks in large part to the Bloc’s altogether sensible and coherent position on government funding for cities, which Montreal’s mayor has just endorsed for the umpteenth time.

Because, you know, being so thuggish and ham-fisted might be reason enough for these people to vote for the Bloc again.