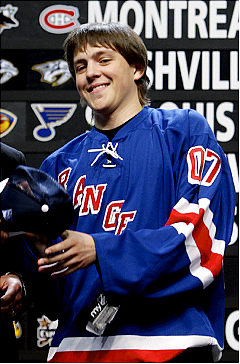 According to the New York Post, the New York Rangers are seeking a compensatory pick in the 2009 NHL entry draft following the tragic death of Alexei Cherepanov last month. The team’s GM, Glen Sather, reportedly raised the issue during the general managers’ meeting in Chicago last month. To back up his demand, Sather cited CBA Article 8.3 (b) that stipulates that a compensatory pick be awarded to a team unable to sign a first-round draft pick. The paper added that Sather is in the process of submitting a request to receive the 17th selection in the second round of next year’s draft.

No doubt this type of move, if it’s true, will raise the ire of many hockey pundits and fans. On the one hand it appears that Sather is merely trying to better his team’s chances of winning down the road, and he seems within his rights to raise the issue given that the Rangers lost a top-end prospect who could have become a star in the NHL down the road. Yet on the other hand, it is hard not to view the move as a classless gesture from a storied organization. Let’s hope the story is a rumour and let the young man rest in peace.