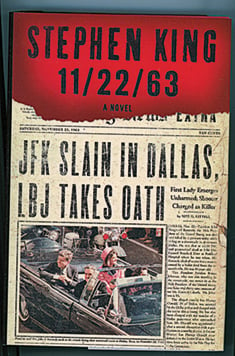 Opinions vary (and how) about the literary quality of Stephen King’s vast output—more than three dozen novels alone—but no one denies the man can tell a story. Or that he has an authentic channel to the zeitgeist, both capturing baby boomer pop culture and contributing to it: who can imagine a prom gone wrong without recalling Carrie, or notice a dog acting strangely without thoughts of Cujo? So it comes as no surprise that when King, 64, wanted to write a time-travel novel, its plot would pivot on his generation’s watershed moment, the assassination of John F. Kennedy in Dallas on Nov. 22, 1963.

Jake Epping, a young Maine schoolteacher, takes up the mission bequeathed him by Al Templeton, the owner of a local diner who discovers that his pantry offers a portal to the age of Ike and Elvis, to 11:58 a.m., Sept. 9, 1958, to be precise. Al has learned that every time one of us visits 1958, it’s like the first time: everything he has done on previous visits has vanished as though it had never been. So Al, dying of lung cancer, needs Jake to go and live back then permanently, or at least long enough—five years—to accomplish a mission both consider vital: the portal doesn’t extend back far enough for Jake to kill Hitler, so he had better save Kennedy.

Al offers a summary of the expected benefits of erasing that bad day in Dallas, succinct enough not to bog down readers and persuasive enough to convince Jake, before King starts tackling just about every classic conundrum ever raised in sci-fi’s time-travel subgenre. Some are disposed of quickly—what would happen should he kill his own grandfather, Jake wonders aloud; “Why the f–k would you do that?” Al retorts. Others unfold more slowly over the novel’s 842 pages. Time is “obdurate,” and resistant to change, Jake soon learns; only later does he realize that’s a good thing, in a story that’s as ingenious as it’s compulsively readable.