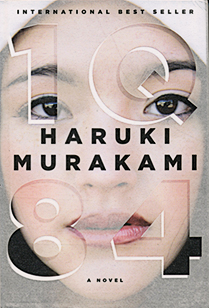 The Japanese novelist, a cult writer to some and a Nobel laureate in waiting for others, has surely shed the former label with this entrancing 900-page opus. In exquisite language the author moves seamlessly from the blackly surreal to the Wodehousian whimsical: in Prague, between the world wars, one character imagines, “people drank Pilsner beer in cafes and manufactured handsome light machine guns.” From the moment Aomame, full-time fitness instructor and part-time assassin of men who abuse women, exits her gridlocked cab to climb down from an elevated expressway, Murakami offers a look, literal and figurative, under the surface of Japan during George Orwell’s iconic year.

This huge stewpot of a novel is the full Murakami, with all his themes and obsessions on display. There are cats and birds (naturally), usually more than they seem, and dualities abound. There are two lovers seeking one another in an alien landscape, rather than the usual man wandering in search of a woman. And because Murakami, on occasion, jettisons subtlety to make a point, there are two moons in the parallel world—a character uncertain whether he or she is any longer in the Japanese equivalent of Kansas only has to look up. There are even two cults. The Eastern-style one, led by a Big Brother figure who understands people’s need for stories as well as any novelist, is reminiscent of Aum Shinrikyo—responsible for the 1995 Sarin gas attacks on the Tokyo subway system, about which Murakami wrote a non-fiction work, prophetically entitled Underground—and the author’s clearest nod to Orwell’s 1984.

In the end, as much as anything, 1Q84 is about time—Aomame even takes to reading Proust—how it traps, rules and destroys us. Or perhaps not, if you’re a Murakami character.