REVIEW: A Natural History of the Piano: The Instrument, the Music, the Musicians—from Mozarts to Modern Jazz and Everything in Between 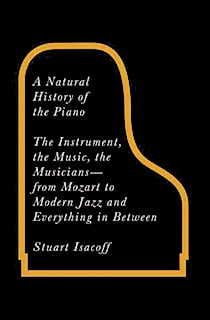 Which is more important, the piano or the pianist? In his study of the world’s most versatile and bulky musical instrument, Isacoff seems to come down on the side of the man (and occasionally, woman) who plays it. He notes that the piano caught on in the 18th century, obliterating the harpsichord, because of its usefulness as a piece of mechanical engineering: other keyboards “couldn’t simply respond to changing finger pressure, the way a piano does.” But what it really did was allow virtuoso players, from the classical to the jazz era, to create different types of sound. Isacoff divides pianists into categories depending on those sounds. “The Combustibles” are noted for extroverted noisy energy; “the Melodists” emphasize attractive tunes; “the Alchemists” are the ones who, like Claude Debussy or bebop players, conjure up unusual sound-worlds; and finally, “the Rhythmitizers” gave us ragtime, rock ’n’ roll, and international influences.

Isacoff includes quotes and mini-essays by many famous musicians, who sometimes confirm his idea that high and low music are connected: Billy Joel is quoted saying he can “discover secrets about music by what I call ‘breaking the Beethoven codes.’ ”

Inadvertently, the book seems to suggest that the great age of the piano is over. The author says that the creative range of the piano “is still expanding, as composers explore the instrument’s endless possibilities.” But many of the pianists he quotes seem to contradict this, with the classical pianists talking about yet another Tchaikovsky concerto performance and the jazzmen waxing nostalgic about older jazzmen. The one ray of hope, as often in music, is Asia; China has “mushrooming piano schools filled with millions of students,” who might go on to expand the international piano repertoire. Or, on the other hand, they might just play a lot of music written when the piano was still a new instrument.

FILED UNDER: A Natural History of the Piano: The Instrument Stuart Isacoff the Music the Musicians—from Mozarts to Modern Jazz and Everything in Between