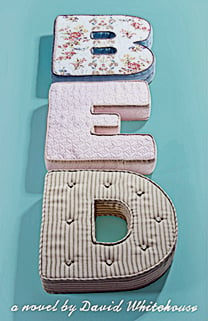 Coinciding with the London riots that last week pitted the alienated, angry, bored, mischievous youths of middle-class England against the dull, endless monotone of their own recession-weary lives, comes Bed, a novel that elaborates on that same theme of waste, decadence and disaster, but casts the whole into the form, not of an angry mob, but of the world’s fattest man, Malcolm Ede.

Mal, a charismatic young man with everything to live for (including Bed’s love interest, the selfless, beautiful Lou), retires to bed on his 25th birthday, for good, eventually growing so fat that he looks “like an enormous sea monster caught and displayed in a Victorian museum of the grotesque.” That sci-fi obesity makes him the centre of his family’s universe—“our sun, our lives in his orbit.”

Told from the vantage of Mal’s brother, who’s left unnamed, Bed takes place in a similarly blurred suburban England, a beige world described here with striking imagination and energy. This is Whitehouse’s first novel; therefore it is an existential book. “What is the point,” Mal asks his brother, pre-fat. “I work in a chair. I fight on a computer game. When I vote, it changes nothing. What I earn can’t buy anything. Maybe my purpose is to give purpose to others.” And purpose he gives. Mal awakes each morning to “a huge cooked breakfast, all the colours of an artist’s palette as he sits at an easel to paint autumn.” His mother spends her life ministering to stasis—“basting an enormous turkey in the oven, lifting it, turning it and coating its flesh without the reward of a hearty meal.”

Surreal, farcical, Bed works because of Whitehouse’s verve and fancy. He appears, right down to the dull thud of his protagonist’s name—Mal—dedicated to the idea of being the next Martin Amis. But Bed is sweeter, though narratively less assured, than early Amis. Read it to hope for what it promises.