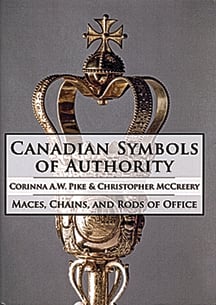 The gilt, jewel-encrusted rods and maces that occupy pride of place in Parliament, the provincial legislatures and even city halls might seem emblems of a dusty bygone era, but not to co-authors Pike and McCreery. To them, the objects represent “continuity in an ever-changing political world.” They are the ceremonial representations of a democratic tradition. If the mace isn’t in the Commons, then no business can be done until it is returned.

Yet though virtually all levels of Canada’s government have had the hardware for generations, relatively little is known about them. McCreery, an expert on protocol as well as the private secretary of Nova Scotia’s lieutenant governor, and Pike, the regal jewels designer at Garrard in London, have delved deeply into the lore. The mace has been a symbol of power since ancient times. And even when its use as a weapon was gone, it retained its aura of authority. Indeed, when republican Oliver Cromwell entered the Commons in 1653, he said: “Take away that bauble [the mace]. Ye are no longer a Parliament.”

The book is also an exhaustive encyclopedia of the various objects, including the silver or gold chains worn by officials at the opening of Parliament. What could be a dry and dull subject is instead a fascinating exploration of the evolution of the various symbols. Parts of the Senate mace date back to 1793, just after the first legislature of Lower Canada met. Originally crafted by François Baillaragé of Montreal—the book has pictures of his original workbook and design—it has survived four fires, two riots and a rebellion.

And the historical symbols are still being made. Months before Nunavut officially became a territory, Aboriginal artisans were busy creating a heritage mace from narwhal tusk, soapstone, silver and semi-precious stones. At the opening of the legislative assembly in April 1999, the Speaker remarked: “It embodies the soul of our land, this assembly and our people.”