REVIEW: Civilization: The West and the Rest 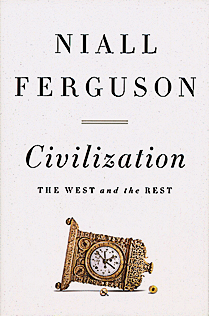 The Harvard historian’s book has become a bitter bone of contention in his native Britain. Critics, quite prepared to single out the West for its particular crimes—racism, colonialism and imperialism—nonetheless object, reasonably enough, to a catchy subtitle that lumps everybody else into “the rest,” making improbable bedfellows out of, say, the Aztec empire and Ming-dynasty China. The larger problem, though, is that neither critics nor supporters seem able to distinguish between a culture’s technical and moral merits—for those on the political left, even Ferguson’s attempt to do so is simply disguised Western triumphalism. Yet the plain facts of Western hegemony are hard to argue.

A tour of the globe in 1500 would not have led the proverbial Martian visitor to predict it. Wealth, population, military strength and scientific knowledge were all centred in Asia. Of the world’s 10 largest cities, only Paris was Western. In 1900 the situation was reversed: Tokyo was the sole non-Western city in the top 10, and London, at 6.5 million people, was the world’s biggest metropolis. Eleven Western powers controlled more than half the planet and produced an astonishing three-quarters of its economic output.

That makes the question Ferguson poses worth asking: even if Europe did inflict terrible evils upon the rest of the world in its rise to domination over it, how did it accomplish that? He does not discount natural, but Europe-favouring, forces—among them, the way Europeans brought the Old World’s diseases to the New World, devastating its indigenous peoples and opening its riches for themselves. But accidental advantage was cemented, he argues, by six “killer apps”: competition (political, military, scientific), science (as a way of understanding and exploiting nature), property rights and the rule of law, medicine, a consumer society, and the work ethic.

The relative weights of all those factors are infinitely arguable, far more than Ferguson’s bottom-line conclusion. The era of Western domination is passing before our eyes, not because those apps have lost their power, but because most of the world has embraced them.

FILED UNDER: Civilization: The West and the Rest Niall Ferguson