Book by John A. Farrell 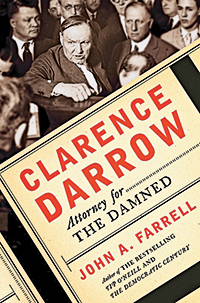 Clarence Darrow was, putting it narrowly, the greatest criminal lawyer of all time. But he was much more than that. He described himself as a socialist, populist and philosophical anarchist. Supporters called him a friend to labour, blacks and women. His enemies called him the devil’s disciple. Darrow earned his reputation as the lawyer for hopeless causes during the United States’ era of industrial violence at the turn of the 20th century. With his gift for courtroom theatrics and a liberal world view, he found common cause with unions and the underclass. Despite overwhelming evidence tying his clients to bombings or murders, he found success, more often than not, by shifting juries’ focus away from facts and toward motives and emotions. He once earned a not guilty verdict for a boy who shot a sheriff point-blank serving eviction papers on his destitute mother. “There are things to consider…?besides bloodshed,” he once told a federal commission on industrial relations.

A genius in front of juries, Darrow was also an extremely complicated man, as Farrell makes plain in this detailed account of his life and politics. He never followed the crowd: tirelessly crusading against the death penalty and racism while supporting free love, anarchy and atheism. He also had an insatiable need for money and, despite his reputation as a friend to the poor and disenfranchised, would often take cases for the retainer rather than the cause; he defended numerous Chicago gangsters, a corrupt municipal gas deal, and engineered a U.S. naval officer’s escape from justice in a racially motivated murder case. Even his supporters found frequent reason to criticize him.

The capstone to his career was the famous Monkey Trial of 1925 in which he defended Tennessee teacher John Scopes against a state law that forbade teaching Darwinism: at age 68, Darrow returned from retirement to once more tackle the mob. “We have the purpose of preventing bigots and ignoramuses from controlling the education of the U.S.,” he thundered in court. He lost the case. Won on appeal. And remains to this day a towering figure in law.

FILED UNDER: Clarence Darrow: Attorney for the Damned John A. Farrell