REVIEW: Confidence Men: Wall Street, Washington, and the Education of a President 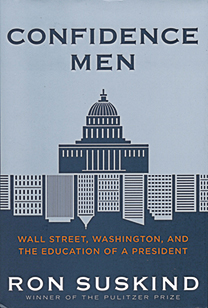 This Bob Woodward-style inside account of President Barack Obama’s economic team is grabbing headlines for one quote. According to Suskind, the warfare between National Economic Council director Lawrence Summers and Office of Management and Budget director Peter Orszag grew so destructive by mid-2009 that their chief of staff, Rahm Emanuel, ordered them to start attending bury-the-hatchet dinners once a week. At the first such meeting, as the pair talked about their Clinton administration pasts, Summers suddenly confided: “We’re home alone. There’s no adult in charge. Clinton would have never made these [Obama’s] mistakes.”

The quote is a sort of miniature allegory for the book, to which the Summers-Orszag battle is fundamental. Summers is Suskind’s Satan—an unrelenting sociopath who wins every argument with fencing tricks, testosterone and bluster. Summers gradually runs so far with the traditionally third-rate NEC job that he ends up with almost as much clout as Emanuel. Orszag, by contrast, is portrayed as a naive, data-driven optimist who lacks Summers’s brutality or savvy. One notices, however, that the dinner dialogue was almost certainly leaked to Suskind by Orszag, who left OMB in August 2010. (There were only two people at that table.)

One also notices that Orszag doesn’t seem to have disagreed with Summers. A lot of people, it seems, are leaving the Obama White House disillusioned. Over and over in Suskind’s narrative, Obama dazzles potential hires with his command of detail and his imagination. And over and over he disappoints—failing to rein in rogues like Summers, tolerating unbelievable insubordination, cultivating sexism, and using instinct to tackle problems that require the incisive reasoning one would expect from a celebrated law professor. Suskind’s portrait of the President is so disconcerting that one is almost forced to take another long, hard look at those Onion jokes about Obama being bipolar. It’s essential reading, especially for Obamaphiles.