REVIEW: A Death in Summer 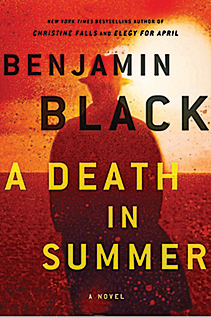 In interviews, Banville stresses the differences between the laboriously crafted prose he pens under his own name and his more spontaneous work as Black. And yet, there’s perhaps a growing affinity: something of The Infinities, Banville’s sun-dappled and atypically buoyant last novel, seems to have seeped into Black’s work. That’s not to say Death in Summer is lighthearted: its first scene describes a corpse with half its head blown off by a shotgun. Quirke is assigned to perform the autopsy, and he and his friend Inspector Hackett decide that the seeming suicide of a newspaper baron is more likely a murder.

Through a scorched Dublin June, Quirke does what any good noir protagonist would do: he snoops around, embroils his life in those of the suspects—particularly that of the victim’s widow—and gets in over his head. But where Quirke’s previous cases got truly messy, with high personal stakes for the pathologist and his eccentric daughter, Phoebe, in this book, despite the depravity Quirke uncovers, one senses that nothing terribly untoward will befall the main characters.

Banville considers the Black books entertainment, and as such, Death in Summer delivers better than its predecessors—the pacing’s improved and it’s more smoothly plotted. Some will prefer the thorniness of the earlier Quirke novels, but there’s no denying the appeal of the prose. A turn of phrase such as, “The south of France looked so much like the south of France that it might all be a meticulously painted bright facade,” is just the kind of precise, wry observation made regularly by one of Banville’s famously unreliable narrators. Banville, though, is reliable: no one writes like him.