A book by Jessie Sholl 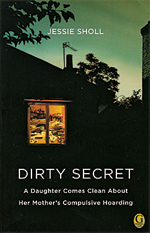 Jessie Sholl left New York City and went home to Minneapolis when her mom was diagnosed with colon cancer. The cancer wasn’t the biggest problem. It was the clutter. “If I could get her to unclutter her house, her cluttered mind would follow:  somewhere under all the filth is a reliable mother, a consistent and compassionate mother?…I know she’s in there. I just have to find her.” Good luck with that, Jesse. Sholl has been the adult in their relationship from the get-go, and this memoir is a therapeutic purge of every complicated emotion that she has ever felt toward her mother. It’s surprisingly breezy but often heartbreaking. Hoarding, as a topic, is big these days, with reality television tapping into our voyeurism, but this is not a bandwagon book. Sholl has been struggling with her mother’s hoarding for 20 years, secretly, and she can’t take it anymore.

Sholl paints a vivid portrait of her mother. Helen is shockingly self-absorbed and lacking maternal urges. It’s no surprise to learn her marriage ended early and her son remains estranged. Just when readers start to hate her, her daughter gives us a glimpse of Helen’s own traumatic childhood. Sholl tells readers, repeatedly, that hoarding is a mental illness and provides arresting statistics: six million Americans are hoarders; most suffered emotional neglect; many are or were nurses, inexplicably; 85 per cent have “first-degree relatives” they’d describe as pack rats; they often see themselves as artists or inventors.

Finally unravelling from the stress of sorting out her mother, Sholl takes the focus off Helen and tells readers about how she, herself, is falling apart. She gets a bit whiny by the end, but this hoarder’s daughter can be excused some self pity, as she waves a white flag and surrenders.