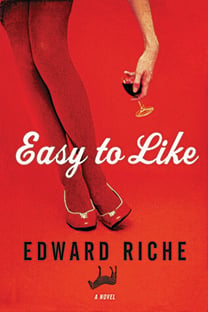 Canadian-born Elliot Jonson is a Hollywood screenwriter and vintner before events conspire to send him home. His penance? To become the vice-president of the CBC’s English-television programming. “It’s like PBS, but with commercials,” he explains to an American movie executive. That’s the kindest thing Elliot says about the CBC, but not the funniest, by far. The title of Riche’s hilarious new novel is a backhanded compliment to TV and wine, topics that find a surprising kinship in a story about a guy trying to simultaneously save his failing vineyard and a public broadcaster.

The book opens with Elliot schooling a couple of California trophy wives on wine appreciation. Elliot plays the straight man to their airhead banter, reassuring readers they’re in for a treat. The rest of the story races along, from FBI investigations to trouble with the U.S. Department of Agriculture. We learn that Elliot was served the ultimate, ironic punishment for moving to Tinseltown after film school: his son, once a child star, is currently in prison for drug possession and robbery. But Elliot isn’t jaded about Hollywood so much as he’s tired of rejection. He calls method actors dissociative psychopaths, more like “method humans.” When Elliot lands in Toronto, his powers of observation are lethal.

The best stuff is the author’s parody of the CBC bureaucracy and its adherence to regional balance and bland programming. Elliot’s job interview is laugh-out-loud funny, as are his speeches to the staff. In the book’s acknowledgements, Riche thanks the CBC employees who “sang”—boy, did they. While “the Corpse,” as some call it, admittedly is an easy target, Riche skewers the policy wonks with glee, just as he pilloried private school administration in The Nine Planets. That book’s protagonist, Marty Devereaux, is a classic antihero, but there’s something sweeter about Elliot, who strives simply to make a great bottle of wine. Elliot’s a dreamer: “You can chase taste all you want,” he says, “you’ll never catch it.”