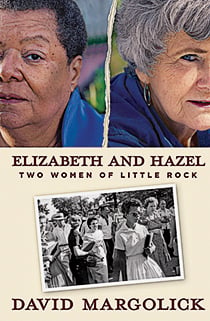 It’s a disturbing photograph—the venom practically spewing beyond the frame—and in 50-plus years it has not lost its power to shock: a young black woman in a starched white blouse and full skirt walks through a crowd; just behind her is a young white woman in a too-tight dress, her mouth curled in such a way that you just know she is saying something hateful. Elizabeth Eckford and Hazel Bryan were only 15 years old when that moment was captured on camera on Sept. 4, 1957, in Little Rock, the day desegregation came to Arkansas. But a picture doesn’t always tell the whole story. Margolick does so, and from this single snap, develops two fascinating biographies: of the photo itself, and of its two primary characters.

The photograph circled the world like a virus, and became an iconic image of America’s ham-fisted attempts at integration, while the media, the NAACP, politicians and tourism bureaucrats torqued it with a civil rights narrative to suit their purposes. Elizabeth, described as stoic and cool, was in fact frightened to the point of sickness as she walked to her newly desegregated high school. Hazel, meanwhile, had been more concerned about looking sexy that day than about the whole segregation matter. A raw, smartass type, she let her big mouth get the better of her. A camera caught the moment, and the lives of both women would be forever entwined.

Margolick’s story about what became of Elizabeth and Hazel, and how the incident shaped their personalities and their lives, is compelling. Against all odds, the two women gradually forged a close friendship, but even that was not without its detractors, Oprah included. Transformation comes for both Elizabeth and Hazel but not as the reader expects, and this is the startling revelation in Margolick’s narrative. A story of atonement and forgiveness, it is also one of simmering bitterness and pride—on both sides of the racial divide.